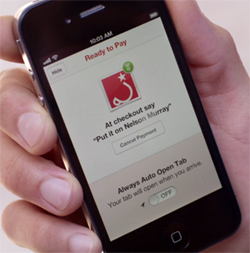 Square’s mobile payments service has seen incredibly huge growth since its debut in late 2009. The company is signing up between 30,000 and 50,000 new merchants each month and we just heard the company is aiming to go more mainstream by selling its credit card readers at Wal-Mart. Plus, the company raised $100 million back in June on a $1 billion valuation.

The new Card Case app for iOS could help make Square even bigger. The app for iOS integrates geofencing through Apple’s iOS 5 operating system to enable hands-free payments. After you enable the feature in the app’s settings, the phone will ping retailers you like that are within 100 meters of your location. Then you can go to store, stand or food truck and say your name at check out to pay rather than pull out a wallet.

The idea of removing your wallet from the essential items you carry around has really taken off in the past year. We’ve seen Google Wallet’s mobile payments service emerge, and many NFC-enabled smartphones are beginning to crop up. Now Card Case can add to this ecosystem to let you visit Square retailers you frequent without touching your wallet.

On top of this, the Card Case app now lets you know about Square merchants that are in your area using a public directory of merchants. So far more than 20,000 merchants have signed up to be in the directory and more are sure to follow.

A full video showing the new Card Case app in action can be viewed below: