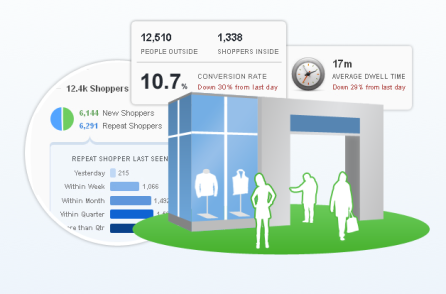 Many online retailers use Google Analytics to track traffic to their site, but what if real-world retailers could access the same data about traffic to their stores? The technology exists in Euclid Elements, which announced a $5.8 million first round of funding today.

Euclid Elements was founded by the minds behind Urchin, the company Google acquired that later become Google Analytics. The analytics software itself is used by millions of website administrators to see how many people are coming to their sites, where they entered the site, how much time they spent on the site and more. It is very instrumental in keeping a business aware of its own traffic.

Physical retailers would benefit from this kind of data, which would help them evaluate if a certain storefront marketing tactic is bringing in more people, what times of day people are walking past the store most and other metrics.

“We’re looking at rates of change, not the individuals,” said Will Smith, chief executive of Euclid Elements, in an interview with VentureBeat.

Euclid’s technology is fairly straight forward. The company sets up a sensor in your store, which detects the Wi-Fi on potential customer’s phones, in addition to people simply passing the store outide. This throws up privacy alarms, but Smith assures his customers there are none. The sensors don’t connect to the Wi-Fi, and Euclid can’t reach out to the internet connection. Instead, it maintains a tally of all those who enter the store with a Wi-Fi connection on their person, as well as of how frequently a person enters the store, how many people walk by, and more. Indeed, the company has an entire privacy section on its website explaining that data is only collected anonymously, isn’t linked to, and customers can opt out of having data collected on them.

However, the technology assumes that everyone is carrying a smartphone. Safe assumption for an area like San Francisco, where Euclid’s first customer, Philz Coffee, is deploying the technology. But around the country, feature phones still exist as a norm. According to a study by Neilsen, 57 percent of cell phones in America remain feature phones. That’s a big chunk of consumers who may be missed by the sensors.

In fairness, it’s still early days for the technology, however, and with this round of funding, the company is planning on making more hires in its engineering department for product development. Long term, the company is looking to deploy new metrics for store owners to measure traffic and on-location marketing success.

Euclid was founded in 2010 and is based in Palo Alto, Calif. The company currently has 15 employees and has raised money from New Enterprise Associates, Harrison Metal, and Triple Point Capital. See an example of what the analytics look like below.