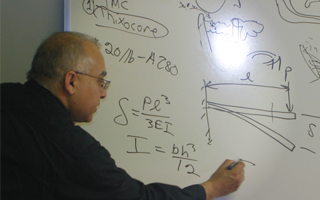 “Spec work” is a term of derision in the creative industries, applied to work that’s done for free to win a prize or a contract. But for some, the model has worked so well that Kaggle is applying the model to science.

The company’s hope is that the competitive spirit can produce new data analysis algorithms as well as it does logos and website designs.

Promulgated by sites like 99designs, the idea behind speculative work is that there are hordes of hungry creatives just raring for a chance at a job. A potential client stages a competition to determine who gets the contract. The creatives compete, each creating work specifically for the client, most wasting hours of time in the process.

For the client, however, it’s a win: They don’t risk anything on an unknown, and the result is often reasonably acceptable.

Kaggle is a new company that is bringing this concept — getting smart people to do specific work free of charge — from the creative industries into the sciences. The startup just announced an $11 million round of institutional funding, quite a large amount considering this is the company’s first round.

The funding was led by two stellar Silicon Valley firms, Index Ventures and Khosla Ventures. In addition, the company scored Max Levchin, a cofounder of PayPal and a Silicon Valley power player, as its chairman.

Kaggle lets organizations such as companies and governments, which have big questions and mountains of relevant data, to post their data and problems to the site, then stage a competition to see who can extract meaning from the data using an algorithm or two.

Data scientists then compete for prize money in return for their intellectual work. These scientists include a network of thousands of PhDs from fields including computer science, statistics, maths and physics. These people come from more than 200 universities in 100 countries around the world.

The scientists who don’t win the contests walk away empty-handed.

But Jeremy Howard, Kaggle’s president and chief scientist, says that isn’t as disappointing as it might sound.

“Most players don’t enter mainly for the cash prizes,” he wrote in an email to VentureBeat. “I competed very frequently on Kaggle prior to joining the company… and was never personally motivated by the money – and was never disappointed to not win. In fact, it was the competitions where I didn’t win that I learnt the most, because I then got to read the winning papers and learnt about what those people found that I missed.”

Kaggle says it has the ability to surface a wider variety of viable solutions. More heads are better than fewer, after all. But the entire model of spec work is a tad exploitative for some people’s tastes, not to say disrespectful of the time and expertise of the parties involved.

On the other hand, Kaggle’s PR reps and clients say it delivers cheap data analysis.

In addition to public competitions, the startup also conducts invitation-only competitions with access to data requiring non-disclosure agreements. For those competitions, the prizes will work more like the rewards for the top-placing athletes in a golf tournament, said Howard, with runners-up also receiving smaller sums.

Vinod Khosla, the founder of Khosla Ventures, said this in a statement from Kaggle: “Kaggle’s platform has the potential to change the way we tackle data analysis problems… This is a fundamental shift in how we’ve traditionally looked at the multi-billion dollar market for data analytics. Add competition among the best scientists, their egos on a leaderboard, and large challenging problems, and you’ve got the perfect mix for stellar innovation.”