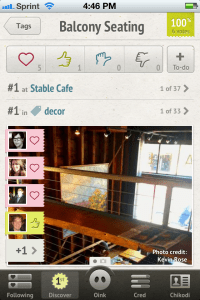 Digg co-founder Kevin Rose has just launched his new discovery app Oink, which lets users tag and rate the things around them.

Oink users take photos with their iPhone, tag their location, and can use photo filters, so the concept combines what people like about photo sharing app Instagram, reviews site Yelp, and the location service Foursquare.

Oink differentiates itself from other mobile and social apps because of its emphasis on rankings-based discovery, and it takes the idea of user-generated content somewhere it hasn’t been before.

“For us it’s really about ranking things,” Rose told VentureBeat. “We’re more about that data than we are about sharing photos.”

Rose was complimentary to Yelp, and said Instagram is “killing it,” but was clear that Oink is meant to let its users assemble information on the wide variety of items in a city, not just the places where those items are found.

And perhaps it is for this reason that using Oink seems so familiar to anyone who has used many of the top smart phone apps available for iPhone. 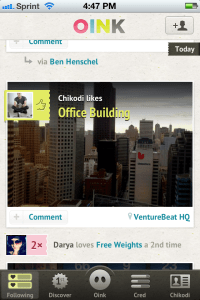 The heavily anticipated app is the first release from Milk, the mobile development studio Rose started after leaving Digg and announcing plans to end his role as co-host of Diggnation, a show on the web video network Revision3, which Rose co-founded.

Rose said that advertising will not be part of the business model, though he didn’t elaborate on any plans the company has to make money. Rose said that if his app is able to drive significant numbers of new customers to businesses, there are ways to earn money for Milk.

“Our main goal is to just prove out the concept that people just want to rank and rank the things around them.” Milk has been working on Oink for about five months, Rose says, and adding new features to the app is his team’s top priority for now.

“Probably some time next year we’ll start looking at what we want to do next.”

Based in San Francisco, Milk has raised a $1.5 million seed round from Rose and a who’s who of angel investors including Dave Morin, Philip Rosedale, Evan Williams, and Shervin Pishevar.