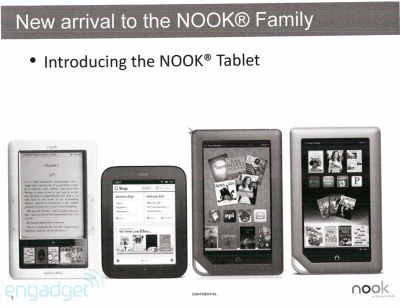 Barnes & Noble is taking on Amazon and its Kindle Fire tablet by expanding its lineup of Nook e-readers to include a lighter, faster, 7-inch color touchscreen device called the Nook Tablet, according to documents obtained by Engadget.

The Nook Tablet, which will retail for $249, closely resembles the Nook Color but has beefed-up specifications. It comes with a dual core processor, 16 GB of storage — twice that of both the Nook Color and the Kindle Fire — and weighs in at just 14.1 ounces.

With a price point $50 more than Amazon’s Kindle Fire, and a launch schedule that appears a bit rushed following Amazon’s splashy Fire reveal a few weeks ago, what will make the Nook Tablet stand out among an expanding group of e-readers and tablets? The leaked documents tout “twice the selection” of applications, “twice the power” and “twice the built-in memory,” but that’s unlikely to sound groundbreaking to the average consumer.