For its annual look at the blogging world, Technorati surveyed 4,114 bloggers in 45 countries. This year, the focus was on why and how they blog, their connections with brands and how they use social media. 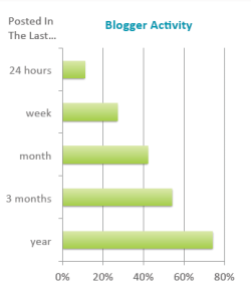 Those surveyed are mostly hobbyists (61 percent) who don’t post daily. In fact, only 11 percent of surveyed bloggers were posting on a daily basis. Thirteen percent of bloggers are doing it for extra income on the side, and only 5 percent are bonafide professional full-timers bloggers. Of the pros, 37 percent say it makes up the majority of their income. The remainder of the bloggers are doing it to promote a brand or company — 13 percent are entrepreneurs and 8 percent are corporate.

For the most part, the bloggers are educated, married parents between 25 and 44 years old. Though still mostly male (59 percent), there was a gender shift from last year when 64 percent were men.

Eighty percent have been blogging for over two years, and half for over four years. Bloggers are juggling an average of three different blogs, up from two last year. It’s interesting that bloggers are maintaining or increasing the amount of time they put into their blogs after launching, instead of losing interest or moving onto the next new thing.

Inside the blogger’s toolbox 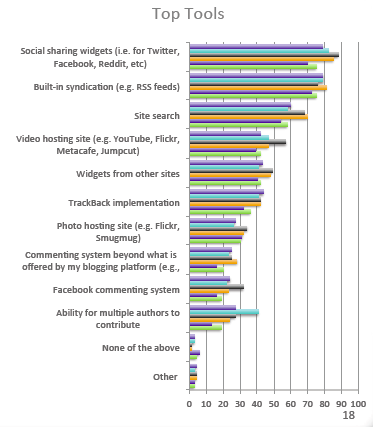 The term “blogosphere” isn’t used much anymore, as the lines between blogs, micro-blogs, and social networks blur. Are Tumblrs blogs? (Yes!) Do people actually still use LiveJournal? (Yes!)

WordPress is the blogging service of choice, with 51 percent of bloggers using it. It was followed by Blogger (21 percent) and Blogspot (14 percent). The rest of the bloggers were scattered among TypePad, Moveable Type, LiveJournal, Tumblr and other tools.

But social media use wasn’t limited to the big three. LinkedIn was the next most popular social network, followed by YouTube and Flickr. However, Facebook and Twitter will still the best tools for promoting blogs and bringing in traffic.

The business of blogging

Two thirds of bloggers post about brands, and a third do reviews. Any blogger with a notable following can tell you about the influx of PR attention. Some welcome it, such as the beauty bloggers who test out free products and post reviews of them. Others are hilariously less comfortable with the pitches.

Brands are very aware of the power of bloggers, and they’re aggressive if not always thorough. According to the survey, a third of hobbyist bloggers are approached about twice a week by brands, and two thirds of professional bloggers get approached an average of eight times a week. Some respondents reported getting as many as 250 and 1,000 pitches a week.

But bloggers aren’t wowed by their relationships with these brands — 60 percent feel they’re not treated as well by brands as the traditional media. Bloggers overwhelmingly feel that brands weren’t knowledgeable about their blogs, and they weren’t interested in building relationships. Less than 25 percent of respondents said brands provided value.

When bloggers do strike a deal with a brand, most keep it above board: 86 percent of bloggers disclosed when a post was sponsored or paid, and 58 percent disclosed when they were reviewing a product they had received for free.

If not these brands and PR people, who are bloggers really influenced by? In a meta spin, the answer is: Other bloggers. When asked what their biggest influences are, 68 percent of bloggers said other blogs. That number was just 30 percent in 2010. They are also influenced by (in order) friends, social media, print media, family, major news websites and television. Less than 10 percent reported being influenced by brand representatives, just slightly more than were influenced by web portals like Aol.

Check out more statistics from the annual survey here: