It is dark. I have spent the last two hours stumbling and falling down a seemingly endless series of wooden platforms, facing off against attack dogs and ghouls, and being shot with poison darts. Finally reaching the ground, I find myself in a poisonous swamp, surrounded by giant mosquitoes and spiders. Somehow, I manage to cut a swathe through my enemies, only to be invaded by a dual-cleaver wielding phantom. Standing knee deep in swamp water, and barely able to move, I just manage to defeat this new foe. I struggle on, now poisoned and losing health fast. In the darkness, I see a tunnel, and inside is a bonfire. A safe haven in the gloom. A chance to replenish my health, and most importantly, a checkpoint of sorts. I am yards from the fire when, in a cruel twist of fate, I am invaded again, in retaliation for a previous transgression. This time there is no surviving. The phantom is upon me, and cuts me down where I stand. I must start my descent again. Welcome to the cruel and beautiful world of Dark Souls, one of the year’s big budget fantasy role-playing games created by From Software and published by Namco Bandai Games. While other blockbuster games are getting a lot of attention, this one could well be worth your time.

The spiritual successor to the 2009 PlayStation 3 exclusive Demon’s Souls, Dark Souls makes its way onto both Xbox 360 and PS3, bringing with it much of the twisted fantasy look and feel of the previous title. With an understated approach to storytelling, Dark Souls greets the player with a brief and suitably dour cut scene (like a short animated film), followed by a tutorial level of sorts, during which you are pitted against an Asylum Demon the size of house, whilst armed only with a broken sword. This initial encounter sets the tone well for the game, with the realization that it is best to run, and resume battle when in a better position to put up a fight. 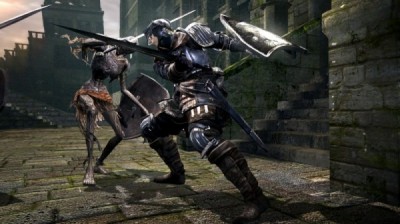 As you progress through the first few hours of the game, small hints are provided to help cope with the bleak world in which you find yourself, but the game never overtly extends a helping hand. In many ways this is the antithesis of popular trends in modern video games. Dark Souls doesn’t provide invisible walls to stop you falling to your death, it doesn’t throw constantly respawning enemies at you, until you reach a checkpoint, and it doesn’t present you with glowing platforms, that will light your passage through the game. Instead Dark Souls is gaming in perhaps its purest form, where a minor mistake can cost you your life, and even the weakest enemy can be a threat, if you approach it without due diligence.

The underlying mechanics to Dark Souls are those of a role-playing game (RPG). Your character, which is initially defined by one of the pre-existing characters at first, can be developed in any number of ways, by investing the souls that you reap when defeating enemies into various categories, such as strength, vitality, intelligence and dexterity. By leveling up certain characteristics, you can design your character to excel at any combat style that you choose, including melee combat, magic or pyromancy. 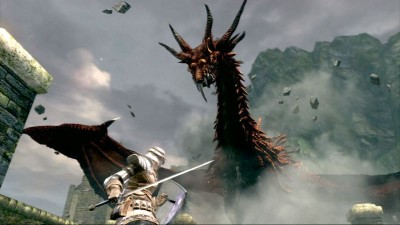 Running in parallel to this character development is the huge range of equipment that can be found, bought or earned during the game, which will play a huge part in defining your playing style. Most of the weapons in the game can also be upgraded along certain paths, with the use of Titanite, and the kind assistance of blacksmiths. Towards the end of the game, I was regularly swapping the weapons, armor and rings that my character had equipped, to deal with different situations and enemies. This freedom to experiment and develop your in-game character plays a huge part in making them feel like a personal creation, rather than just a generic action-hero. It also helps heighten the emotional impact of the heartbreaking failure and very occasional sublime success that you will experience during the game.

The world and character designs in Dark Souls are incredibly inventive and diverse, and I was often left staring with awe at the scenes that I encountered, venturing further just to see what I would find next. Each area slowly reveals new wonders, and creatures as yet unseen, sometimes lurking around a dark corner, or dimly visible in the gloom ahead, and often heard long before they come in to view. Doing battle with these creatures is often a brutal, tiring and drawn out experience, a far cry from the combos that you can effortlessly pull off in games such as God of War, or Bayonetta. Steel clashes on steel, magic attacks are blocked or avoided, and you soon realize that defense and evasion are of paramount importance. The often slow pace of the combat and the steady rewards of exploration lend the game a poetic feel, which is enhanced by the strange nature of much that you encounter on your journey. 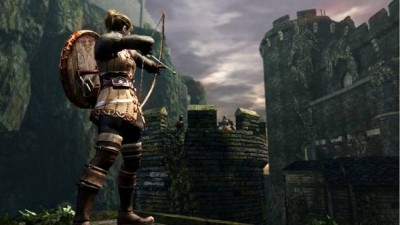 The sense of scale in this game is at times truly breathtaking. Draw distances are huge, and threats yet to come can often be seen on a distant castle wall, or in the depths of a valley, sometimes hours before you will actually reach them. Whilst there is very little hand-holding in the game, it does lead you beautifully through the world, if you let it, allowing you to open hidden pathways that slowly reveal further areas to explore, and offering shortcuts to places already visited. In this sense, every section of the game that you beat offers further insight to the larger game world, and helps to create the feeling of a living, breathing environment, that is permanently affected by your movements and actions. Adding further to this impression is the fact that you will rarely see a loading screen or cut scene during your journey, barring boss battles, as each area blends seamlessly with the next, giving Dark Souls a great open world feel.

At the heart of Dark Souls are a variety of boss battles. Each boss varies wildly in size and stature, but all are hugely intimidating when first encountered. Depending on the character type you are using, and the weapons you have crafted, these battles can either be surprisingly simple, or controller smashingly difficult. It is at these points that the game’s multiplayer elements come into their own. Whilst connected to the online servers, players can view and leave messages for each other, offering helpful advice and words of encouragement. It is also possible to summon other human (and occasional AI) players into your game, in the form of white phantoms, to assist with getting through a level, or defeating a boss. With no communication available in game, other than a series of gestures, these meetings are often as understated and mysterious as the game itself. However, the feeling of kinship and mutual achievement that can be gained whilst teaming up with a fellow traveler, to take down a vast enemy, is incredible. 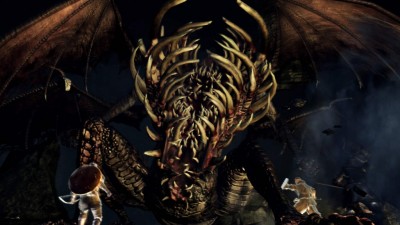 There are other online aspects to Dark Souls that take a different form to this direct assistance. It is also possible to invade another player’s world, in order to kill them, stealing their souls and humanity. If this happens to you, then it is possible to ‘indict’ the invader, with their retribution for invading coming at a later date.  There are also certain covenants that you can join which may find you challenging fellow members for rewards, or being summoned to defend an area against intruders. These online aspects are beautifully integrated into the main game, and never give the feeling that you are being jarred from what is otherwise a very solitary and often lonely experience.

Demon’s Souls was a notoriously difficult game, and Dark Souls is also a very harsh and brutal challenge at times, but like its predecessor, it provides a deep sense of achievement and empowerment as you progress. You will rarely feel that your character is overpowered when entering a new area, but when revisiting an earlier stage, you can feel like a hero, albeit for a short while. At the same time, this feeling is always tempered by the realization that tougher times are to come, and the fact that even a simple mistake can cost you dearly, no matter how strong your equipment, or how high your level. Wade into battle overconfident or under prepared, and you can be cut down by even the weakest enemy. This is especially true if you find yourself surrounded and overwhelmed, a situation in which many of Dark Souls’ numerous traps conspire to place you.

With many games now offering a paltry four or five hour single player experience, Dark Souls, by contrast, offers an incredibly deep campaign, that will take you weeks, or even months, to complete. My final playing time having beaten the game was just over 70 hours, and for some players that may be even longer, depending on how much time you wish to invest in crafting, leveling up, working for covenants and exploring for treasures. After you complete the game once, there is also the option to continue on to New Game Plus, in which you keep most of your equipment and your Soul level, but find that the difficulty level has increased. This, along with the previously mentioned multiplayer aspects to the game, means that Dark Souls has the capacity to keep you entertained for as long as you stick with it.

In a genre that can seem oversatured with product, Dark Souls really stands out from the crowd, with its powerful take on the action RPG. It offers no easy ground in terms of its difficulty level, but success in the game brings a feeling that is much more satisfying because of this. With a number of big name releases dominating the gaming market this winter, including the impending release of Elder Scrolls V: Skyrim, I would encourage you not to let Dark Souls pass you by. It may well be a sleeper title, but it is one that can dominate your waking hours if you give it a chance.

Dark Souls offers a vast and mysterious game world, beautifully crafted and filled with magic and wonder at every turn. It offers a level of challenge that is missing from most games, inviting you to explore and discover its secrets for yourself. The mixture of RPG, action and subtle multiplayer elements is truly sublime, and is a great example of how to incorporate multiplayer features into a largely single player experience. Whilst Dark Souls may not be for everyone, if you wish to immerse yourself completely in a deeply personal adventure, and accept the challenges it throws at you, then you should embrace it with open arms.

Dark Souls is out now for PlayStation 3, Xbox 360, and PC. The publisher provided GamesBeat with a copy for the purposes of this review.