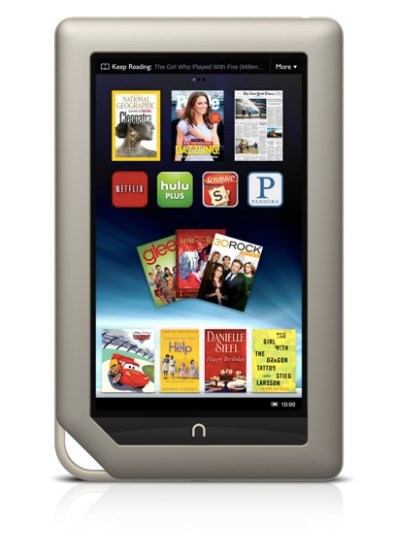 The company announced the $249 tablet today at a press event at its Union Square store in New York City, but as is often the case these days, details of the Nook Tablet were leaked last week, leaving little excitement for today’s reveal.

The Nook Tablet looks exactly like the Nook Color — but that’s not a bad thing. The Nook Color’s design was attractive, lightweight, and durable, so it makes sense for Barnes & Noble to revisit that design for its successor. And even though it’s a rehash, the Nook Tablet has far more personality than Amazon’s Kindle Fire, which is a fairly boring rectangular slate.

The 7-inch tablet packs in a 1.3 gigahertz dual-core processor, 1 gigabyte of RAM, all in a package that weighs in under a pound (it weighs about 40 grams less than the Nook Color). That means the Nook Tablet offers twice the RAM, and around 300 megahertz more processing power, than the Kindle Fire.

And with 16 gigabytes of on-board storage (upgradeable to 48GB with an addition 32GB SD card), the Nook Tablet packs in far more storage, making it better suited for storing lots of media.

You’ll have to find media for the device on your own, though, since Barnes & Noble doesn’t have an integrated digital music and video store. The company says it’s working on something that could help to solve that problem, but for now it’s satisfied with focusing on the multibillion digital book, magazine, and textbook market.

Barnes & Noble spent quite a bit of time praising the Nook Tablet’s screen, even though it’s the same exact screen technology seen in the Nook Color. The tablet features an IPS display by LG with full lamination. According to Barnes & Noble CEO William Lynch, that means the screen offers far less glare and reflection than typical displays.

Taking a cue from Apple, Barnes & Noble says that it will offer support for the Nook Tablet inside of its retail stores.

The company is also reducing the price of its existing readers: The Nook Color has been slashed to $199, and the Nook Simple Touch is now $99. There are also big updates coming to both devices, including over 100 improvements for the Nook Color, and faster page turning and sharper text for the Simple Touch.

The Nook tablet will begin shipping on November 17.