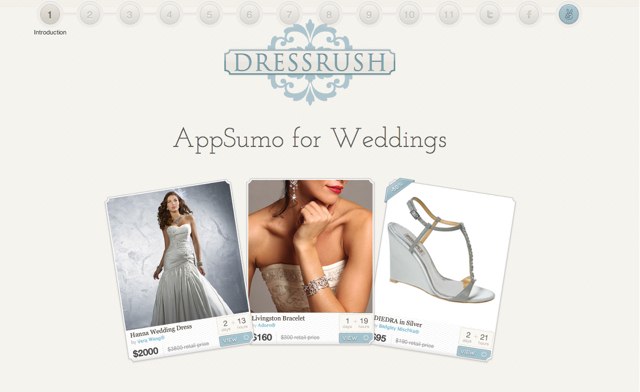 To hell with PowerPoint — with a web-based slide deck you can achieve some eye popping effects and maybe even get the attention of dozens of potential investors.

And don’t worry if you have no idea how to do this, because a startup called DressRush has open sourced its pitch deck, which became an overnight sensation last weekend.

DressRush, a fresh-faced 500 Startups accelerator class member few have ever heard of, tweeted a link to its unconventional pitch deck on Friday and subsequently found itself the belle of the internet’s ball.

The pitch went viral almost immediately. By Friday afternoon, the web deck had been viewed more than 15,000 times. As of Monday, DressRush had fielded roughly 50 inbound inquiries from investors anxious to learn more about the company, Hall said. The startup’s advisory round is now almost oversubscribed.

The deck, an infographic-esque webpage rich in style and panache, is now anyone’s to replicate, as DressRush has graciously open-sourced its process — complete with code samples, screenshots and a plugin — for would-be emulators.

As the story goes, DressRush, which provides brides and bridesmaids with deals on designer dresses, was looking to raise a $300,000 round of funding via AngelList and wanted to pitch investors in an imaginative way. After all, DressRush is not a technology company, so how ever would it standout from the startup pack?

“We had some good success talking to investors, but we wanted to do something a little bit different to get people’s attention,” Aaron Hall, co-founder of Dress Rush, said in an interview with VentureBeat.

“I came up with the idea to do a web-based pitch deck, and we had recently hired a new UI designer,” Hall added. “I threw the idea by him and he said, ‘Yea, that sounds cool. We could do something like that’ … So we knocked it out, and we sent it via Twitter … and before we knew it was on Hacker News.”

“It’s not rocket science,” Hall said. “We didn’t reinvent something that wasn’t out there. We just pushed something simple out in a different way.”

Now you can too. But being second or third to release this type of pitch deck isn’t very remarkable, is it? I put the question to Hall.

“I think that the first time you see something it’s novel … but it just depends on where people take it,” he said. “There’s a lot of different ways that you could create this ‘Pitch Deck 2.0’ … there’s plenty of different ways to push this thing [forward].”

DressRush is a four-person team based in Mountain View, Calif. The startup will graduate from the 500 Startups accelerator in January.