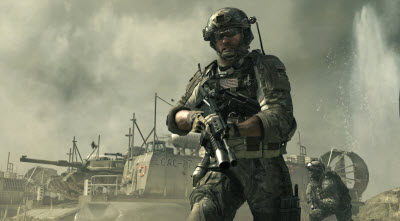 Call of Duty Modern Warfare 3 delivers what it promises for gamers. It’s an epic first-person shooter combat game with all of the drama and action of a Hollywood war movie. Because the developers solidly executed their mission for the third time running, this game will likely be one of the biggest-selling titles of the year. I’ve played it through and it didn’t disappoint me. To me, it’s one of the contenders alongside Uncharted 3: Drake’s Deception for the best game of the year.

Activision Blizzard has mastered the very difficult job of giving Call of Duty fans a new blockbuster game every November, with plenty of multiplayer play to keep them busy for much of the year. Modern Warfare is the crown jewel property within the Call of Duty series; it focuses on first-person combat in the modern era. In the first-person shooter genre, this game is as big as it gets. At the current rate, Call of Duty games are generating more than $1 billion in revenues for parent company Activision Blizzard. Analysts expect this title to sell more than 20 million units, beating last year’s record-setting Call of Duty Black Ops. 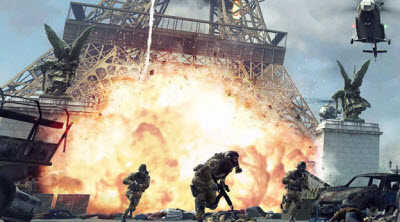 The grudge match with Battlefield 3

I played Battlefield 3 all the way through and I did so while heavily medicated. Indeed, what started as the flu turned into walking pneumonia for me. I wasn’t supposed to be doing anything but rest. But there was no way I wasn’t going to play both Battlefield 3 and Modern Warfare 3 all the way through as soon as possible. That’s what gamers do as a kind of self-sacrifice for the greater cause.

I didn’t think the overall Battlefield 3 experience was quite as bad as our reviewer, Sebastian Haley, described. He definitely nailed the first-day server issues as inexcusable. And Sebastian was right on the money about what was weak about Battlefield 3: weak characters, a so-so story, and poor storytelling when it comes to drama and tension. Sebastian is tough, but he’s got keen insights.

I had fun playing infantry, tank, and air battles in Battlefield 3 because they weren’t the same as Call of Duty. I can see EA’s path of improvement with its first-person shooters. But in the end, I had to favor Modern Warfare 3. Battlefield 3 may be more realistic, but it just isn’t nearly as fun to play as Modern Warfare 3.

That latter statement is my opinion; I fully expect a lot of fans will see it the other way around. I’m actually glad that these two games have come out so close to each other, as they will provide sharp comparisons and contrasts for gamers on the different roads that developers can take in making these kinds of games. When one game’s servers are down, gamers will have the option of jumping to the other one. Competition is a good thing, and I think both of these games are better for it. I suspect a lot of people will be like me and play both games all the way through.

The single-player campaign for Modern Warfare 3 wraps up a story that began in 2007 with the first in the Modern Warfare series, Call of Duty Modern Warfare. That game took the series out of World War II and brought it to a whole new level of serious single-player and multiplayer modern-day combat. That move completed the game’s shift to “epic realism,” which Activision chief Eric Hirshberg says is striking a balance between real world authenticity “where this could be happening” with the unbelievable, Hollywood style epic moments that seem like they’re out of the movies.

Hirshberg also says that Call of Duty games are unique in delivering an “ultimate adrenaline rush.” You play it with white-knuckles and it shakes you up. The games are also easy to learn and hard to master. And Call of Duty games are primed to run at a first-person speed, or 60 frames per second, Hirshberg said. For the most part, he’s right. The game stands apart based on those claims.

Battlefield 3’s console versions ran at the slower speed of 30 frames per second, and the difference was noticeable. While Call of Duty’s physical effects, such as destructible environments, aren’t as good as Battlefield 3’s, the graphics are really quite good and playable. Only Battlefield 3’s graphical quality on the PC stands far above Modern Warfare 3’s. Still, I usually keep an eye out for graphics flaws, and I didn’t see anything horribly out of place in Modern Warfare 3. 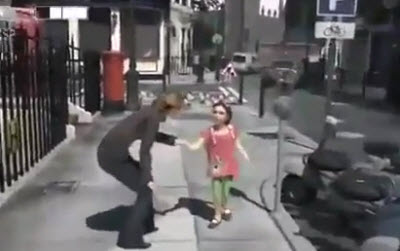 It seems like it is pretty hard to make a game about modern warfare without being controversial. New Yorkers will certainly cringe at seeing their skyline in ruins in the game, and Parisians will bemoan the flames on the Eiffel Tower. Londoners in particular will be quite upset with this game.

The new game has controversial elements in it, just as the prior games had. In this title, you can choose whether to see them or not, just as you could (after a patch was installed) on Call of Duty Modern Warfare 2. Two years ago, Modern Warfare 2 drew widespread criticism because the user could participate in a civilian massacre at a Russian airport. This time, the disturbing scene isn’t so interactive and it is much shorter. In it, you see a child and her tourist parents killed after a truck stops nearby, explodes, and spreads poison gas throughout London. Movies have scenes like this all of the time to drive the emotion of war and violence home. But Activision Blizzard catch hell for including the scene, particularly from the mass media that doesn’t play games. For hardcore gamers, this scene fits with the disturbing portrait of war in the age of terrorism that the game series paints so well.

Thankfully, the gutting of Infinity Ward with the departure of its founders (in an ongoing dispute with the parent company) didn’t hurt this game. Infighting over royalties tore the team apart and nearly pushed the game off schedule, but Activision Blizzard pulled in the reinforcements, enlisting developers from Infinity Ward (more than half the staff stayed to work on it), Sledgehammer Games, Treyarch, Beachhhead Studios (which worked on the Call of Duty Elite social network) and Raven Software. With more than 500 developers to tap, the team finished the title on time for today’s launch. By using multiple studios and staggering their work across multiple years, Activision Blizzard can feed rabid fans a new major game every year, without sacrificing quality. Activision Blizzard may well have put off some future projects, but it managed to finish Modern Warfare 3 — without major glitches.