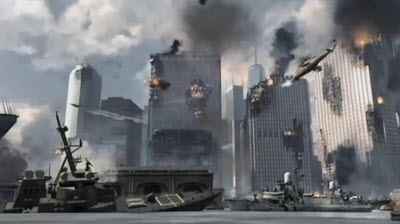 Way over the top

The Call of Duty developers have a knack for putting you in the most dramatic combat scene possible and then focusing in on nothing but eye-popping action, where you move from the frying pan into the fire over and over again.

By the time you finish, the game will take you on a whirlwind tour of Manhattan, New York harbor, Brooklyn, Sierra Leone, Somalia, Russia, the London underground, London’s docks, Paris, downtown Prague, a castle in the Czech Republic, the skyscrapers of Berlin, a mine in Siberia and a fancy casino in the Middle East.

You’ll fight in the glass jewelry shop, underwater, in a rubber speed boat, on board an airplane that is losing its hull integrity, in the dark with night-vision goggles, during high-speed car chases, and in the middle of a sand storm. Sometimes you go into battle with guns blazing, but often you have to scoot by guards in stealth and take them out with your knives. You have all manner of assortment of weapons to use, including sniper rifles, assault rifles, pistols, shotguns, rocket-propelled grenades, Javelin anti-tank missiles, and you can even control a remotely piloted mini tank with a chain gun that can deliver some fierce firepower.

You’re pretty much always an elite foot soldier, but you can fight as the machine gunner in a tank, fire mortar rounds at approaching enemies, lob smoke for air attacks to obliterate nearby enemies, take out enemies with well-placed sniper fire, command the 105 millimeter cannon of a giant AC-130 aircraft at tiny targets on the ground, glide down zip lines, guide missiles from drone aircraft, and shoot it out among the cubicles of ruined offices.

These activities aren’t new. But they are executed with a sense of drama that makes them exciting and familiar at the same time. For instance, you go from a battle on the ground in Paris to the AC-130 aircraft flying above it and back down to the ground battle — all in a very short span of time. There isn’t time to get bored, even though you’ve fired from an AC-130 in previous games. It’s enough action for 10 war movies.

Occasionally, you feel like there’s too much action, like when you’re escaping from a Russian submarine, and you’re simply along as a spectator for a spectacular ride. And the greater the spectacle, the less realistic it seems. But as long as that ride is entertaining, I don’t mind.

Is 60 frames per second good enough?

The graphics are speedy and high quality, and the cinematics, or animated film-like sequences, are seamlessly woven into the game play, much like in Uncharted 3. Sometimes it’s hard to spot the exact transition from the cinematic to the playable game. Activision Blizzard’s mandate is to focus on the speed of the game. But it’s hard to notice graphics flaws. The sounds will make your pulse pound and the music is primed to deliver an overwhelmingly immersive experience. One of the great visual effects usually happens at the end of a mission, like when you board a helicopter and the camera pulls out wide, showing the devastation of a city and the crashing collapse of a major landmark in a view from the air. You move from game play to cinematic in a seamless way.

It’s nice that you are a companion to the major characters Soap and Price during much of the game, since they bring a kind of emotional immediacy to the action that unfolds around you. If they scream at you to jump for cover, you’re going to jump for cover. That’s a more dramatic moment than when you get hit unawares by bullets in an ambush, with no one warning you to get down. The graphics and sound effects are good, but they’re wrapped in the story as well and they serve to advance it. 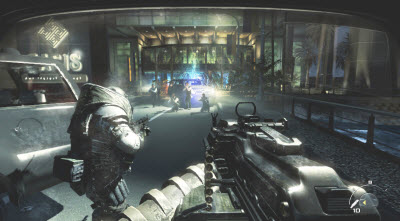 Pointing the gamer the wrong way

One of the frequent “bugs” that I find in shooter games is that you can often get lost and not know what you’re supposed to do next. You emerge from a firefight and find that your companions have moved on to the next part of the mission, but you don’t know where they are. Call of Duty solves this problem by putting a white dot with the word “Follow” on the soldier you are supposed to follow, whether that’s Soap or Price or someone else.

Still, it’s possible to get lost. Sometimes you move into a larger battle space, such as a plaza in a castle, and find you’re not sure exactly what to do. You can take out a lot of the enemies and find that your companion is just ducking low in the middle of the plaza. Where are you supposed to move? It took me a while to figure out that I had to move along the sides, find a corridor where I had to shoot it out, and then link up with my companion in a hallway in the upstairs part of one of the walls to the plaza. It was not easy to find that place where I was supposed to be. To me, that’s a bug in the game, not a flaw in the player.

Another flaw that I spotted a couple of times in Battlefield 3 is that you can stay in one position and shoot the same enemy over and over and over again. As my team was assaulting the previously mentioned skyscraper, I lay in wait on the flank and fired repeatedly at one soldier on the far end of the building’s exposed third floor. Some dumb soldier kept moving into the same position, as if the soldier were merely a robot getting up and going back to the same spot. That happened a couple of times in Battlefield 3, but it didn’t happen to me in Modern Warfare 3. In fact, when I was trying to get through the tank escort mission, the same soldiers often didn’t show up in the same place, even though I was repeating the mission over and over.

If you do happen to get stuck in a part of the game, the usual reason for me is that I’m getting shot and I have no idea where the shot is coming from. Sometimes you get a clue by watching the animation that continues for a second or two after you get shot. But there are other times when it seems like the shots are coming out of nowhere. That makes the game more challenging.

It also changes your tactics. You have to plan which attackers you’ll take out first and then proceed to the next ones methodically. Sometimes I just let my companions take on the bulk of the shooting and I crawl along the ground. It’s not very dignified or heroic, but it’s a good way to survive when you just have no idea where the enemies are hiding. The problem is they will toss grenades at you if you stay holed up in one place too long.

For the most part, you can figure where the enemies are through trial and error. Unlike in real life, in the video games you get an endless number of lives to experiment with. If one approach doesn’t work, you try a slightly different tack the next time.