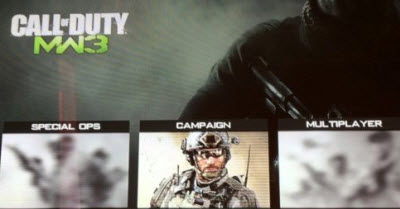 I had a little trouble saving my missions. This is an automated process that allows you to pick up exactly where you left off by selecting “resume game.” Since the mission saving didn’t always work, I had to backtrack and redo those missions. I discussed the matter with Infinity Ward and they said that they hadn’t heard about that problem with anyone else.

The time counter for time spent playing the game was a little off as well. That’s because the timer continues to count time if you back out of the game and leave your machine on sitting at the Main Menu of the game. So the single-player game time on the Hardened level of difficulty is more like eight to ten hours, though my counter said I had played it for 20 hours. The actual game time felt like a satisfying duration for the game.

When I completed the campaign on Hardened, I was surprised to see the game said I had only completed 75 percent of it. That’s because I didn’t collect all of the “Intel” available on every level. And I would have gotten more percentage points if I had played the game on the highest level of difficulty, Veteran. Fortunately, there are no major flaws in the game itself. 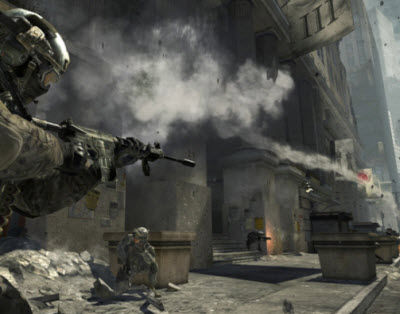 Modern Warfare 3 features a new survival mode where one or two players can fight wave upon wave of non-player enemies. This Spec Ops mode allows you to start out with just a pistol and then earn “cash” points for every kill you get. The enemies are easy to shoot at first, but they become harder over time. In between attack waves, you get so many seconds to “buy” better weapons, ammo, and armor from chests that are spread out on the map. You can buy grenades, automatic weapons, and the whole assortment of weaponry that you have in the single-player campaign. The enemies get tougher, like a shotgun-armed armored soldier who has to be taken out with heavy ordinance. I find it useful to get some easy kills in Spec Ops mode by buying Claymore mines that the enemies will run into, earning you easy extra kills that pay for themselves.

But I never last for long in Spec Ops. I’ve got a long way to go before I get anywhere near completing the Spec Ops missions. But it does the job. If you play with a friend, you can spread your weapons across two players. But the waves never stop coming and they eventually get you. After you die, you’re tense and you’re feeling like “I can’t believe that last guy got me.” 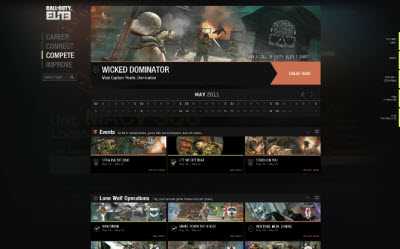 One of the new attractions for gamers this time is the new hardcore gamer’s social network, Call of Duty Elite. It includes a free service that allows you to explore the Call of Duty universe, view game-related videos, participate in tournaments, join like-minded friends in both groups and clans, and look up your career statistics such as your lifetime kill/death ratio in multiplayer.

[Update: Activision Blizzard acknowledged it is having trouble keeping up with player registrations on Nov. 8]

Elite will also have a subscription service of $49.99 a year that will make monthly downloadable content free. You’ll also get access to daily competitions with virtual and real prizes, the ability to level up your clan, and expert advice on how to improve your game play.

The PC version of this service is late. But I checked out the Xbox Live version of the network and it works as advertised. I played a few matches of multiplayer and saw the match results show up under one of the tabs in the Career section of the Elite service. I could see exactly how many kills and deaths I had, which weapon I used to get those kills, and the percentage accuracy of my shooting. I don’t know how EA’s Battlelog service compares yet because I haven’t been able to log into it.

For entertainment, the Elite TV section offers professionally produced shows such as The Noob Tube and Friday Night Fights, as well as access to cool YouTube videos of exploits in Modern Warfare 3.

My main complaint about this service is that I wished Activision Blizzard thought about doing this at the dawn of Call of Duty. I feel like all of the hours I’ve already invested in this game haven’t been recorded. But going forward, at least I’ll be living a documented Call of Duty multiplayer life. I don’t know if it’s worth paying for Call of Duty Elite yet. But it could definitely be a way to deepen the overall Call of Duty experience and make me spend even more time with the game.

In summary — and multiplayer review to come

Call of Duty Modern Warfare 3 brings a real sense of closure to the series. If they never make another one, the series will feel complete. That’s what the third game in a trilogy is supposed to achieve. You can see an end to a story that started more than five years ago and you can play it to its spectacular finale. I’ve been a fan of this series since the very first Call of Duty game debuted, and I’m amazed to see how far it has come in defining the genre for everyone else to follow.

So while the game play is familiar, this title is not the same old thing, a problem for many sequels in the video game industry. I played it on the Xbox 360, and it is available on the PlayStation 3 and PC as well.

Based on the superior single-player experience and the multiplayer fun, I rate the game 91 out of 100.