Salesforce has revealed a new web-based application called Do.com that combines task management with social features to create a smart way to get things done on your own and in groups.

Several other companies have tried and failed to make task management successful (there’s fresh competition from former Facebook staffers with Asana), so it’s telling to see Salesforce, which is known for its enterprise apps, trying to take a stab in this space. This suggests companies continue to believe there’s a huge market in helping people manage online tasks — and that no one has cracked the nut yet.

Do.com captures the laid-back style of an upstart web application with a simple interface and intelligent HTML5 deployment, but it’s also built with Salesforce’s emphasis on reliability, accessibility and security. It was built on top of Heroku’s cloud app platform and programmed in Ruby on Rails, offers an open API for developers, and has received input from some of Salesforce’s brightest team members.

“Even though Do.com is owned by Salesforce, we think of ourselves like a startup,” Salesforce Senior VP Sean Whiteley told VentureBeat. “We’re a separate team of 14 people, we have our own code base and we’re even in a different building.”

Do.com is an anomaly inside of the Salesforce family for another reason — it’s the first non-enterprise offering the company has ever released. Unlike Chatter, Salesforce’s enterprise social networking product, Do.com app is meant to be used by small businesses and small groups who need to collaborate. By having several people see uncompleted tasks and projects, there’s more pressure to get the work done in a timely fashion.

Because Do.com was programmed using HTML5, it runs in any browser and works just fine on the Flash-less Apple iPad as well as Android tablets like Samsung Galaxy Tab 10.1. For smartphones, the Do.com team has created a native iPhone app, but it does not yet have an Android app. The team expects an Android app to be ready some time next year. 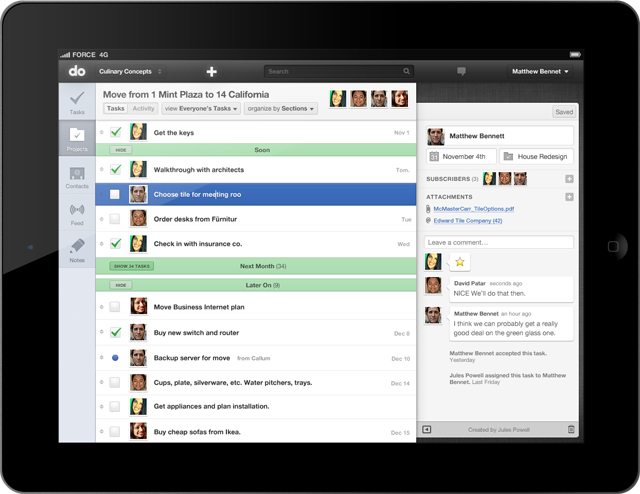 Do.com is based on popular social productivity app Manymoon, an app Salesforce.com acquired back in February. Outside of emulating Manymoon’s interface, Do.com also followed its predecessor by including a Gmail gadget that makes it easy to assign tasks through e-mail. For example, send a short e-mail to task@do.com and it will automatically detect your address and add an entry. Outside of Gmail functions, Do.com has been programmed to work with Google Apps, Salesforce and Dropbox to make tasks jive with tools your team already knows.

“The goal was to create an app that fits into the applications you already use,” Whiteley said.

Do.com has been in private beta testing thus far, but now the team wants to open its beta to more participants. It has extended an invitation for the first 200 VentureBeat readers that sign up using a select link to give it a spin. Go to the link https://www.do.com/users/sign_up and enter the code “DONKISCHESPOZ” to take part. Those who get in will also get 5 invites of their own so they can bring other people into the app.

“It’s meant to be used with other people,” Whiteley said. “Many times it’s more about fostering a conversation instead of just checking things off a list.”

Do.com will be more widely available in the coming months after it launches publicly. The app is available in several app stores, including the Apple App Store, Android Marketplace, Chrome Web Store, Salesforce AppExchange and LinkedIn Applications. It is currently free, but it will add premium paid features next year. Whiteley said elements like changing the way it looks, adding new fields and deeper administration tools are being explored as potential premium features.

More photos of Do.com’s interface on iPad, in browser and on the iPhone can be viewed below:

CloudBeat 2011 takes place November 30 – December 1 at Hotel Sofitel in Redwood City, CA. Unlike any other cloud events, we’ll be focusing on 12 case studies where we’ll dissect the most disruptive instances of enterprise adoption of the cloud. These case studies will highlight the core components of the cloud revolution: security, collaboration, analytics, mobile usage, increased productivity, and integration. Join over 500 executives for two days packed with actionable lessons and networking opportunities as we define the key processes and architectures that companies must put in place in order to survive and prosper. Register here. Tickets are limited!