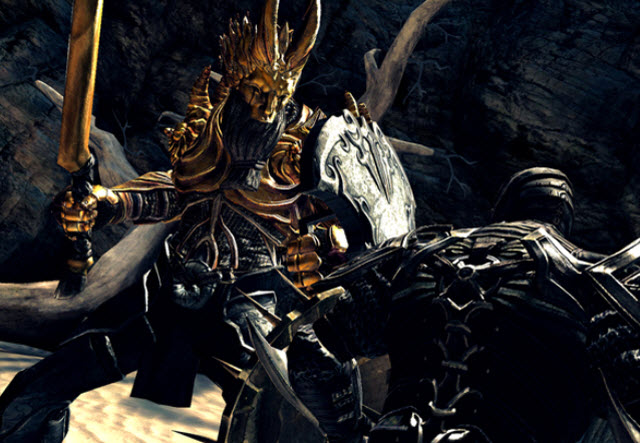 The mobile game landscape has changed dramatically in the last couple of years, with Apple and Android games surpassing both Nintendo and Sony to claim leadership of the market. 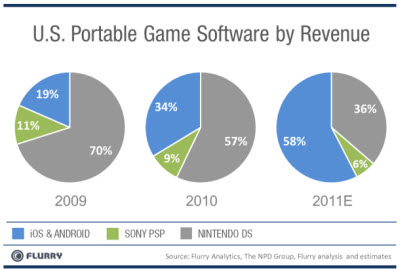 That’s an astounding turnaround, much like how Nintendo pulled a fast one on Sony with the launch of the Wii game console in 2006. Apple was able to pioneer the market for smartphone gaming with the launch of its App Store in 2008. Google followed suit with the Android Market, and now there are hundreds of thousands of titles available on both stores, which allow users to download games over-the-air with a simple tap on the screen.

By contrast, Nintendo and Sony have made little headway in the age of apps. They’re trying, but their efforts look feeble so far, and packaged software is still their dominant means of delivery to consumers. But they’re feeling the impact of digital distribution, just as the impact has been felt in news, magazines, books, TV, music and film.

Meanwhile, the Apple iPad and Android tablets are grabbing the high-end of the portable gaming market, and Apple is stealing away the kids with the iPod Touch. Flurry’s report asks, appropriately, “Is it game over for Nintendo DS and Sony PSP?” Apple’s devices, such as the new iPhone 4S, have been tripling their graphics performance just about every year. And touchscreen gaming on smartphones and tablets has taken off in a way that neither Nintendo nor Sony have been able to exploit.

The chart above includes projections for November and December. But it shows that iOS and Android command about $1.9 billion in revenues, compared to $1.2 billion for Nintendo, which is expecting to report its first fiscal year loss in the year ending March 31, 2012. Much of that revenue has come through the free-to-play business model, where users can play games for free and pay real money for virtual goods. That same model has turned Zynga into a powerhouse in social games.

“The days of paying $25 or more for a cartridge at a retail store may soon end,” Flurry said.

The growth of smartphones and tablets is accelerating. A total of 250 million iOS devices have been activated, and 190 million Android devices are on the market as well. Nintendo is struggling with sales of its 3DS, which took an ill-advised foray into glasses-free stereoscopic 3D of questionable quality. And Sony is responding with the PlayStation Vita early next year in the U.S.