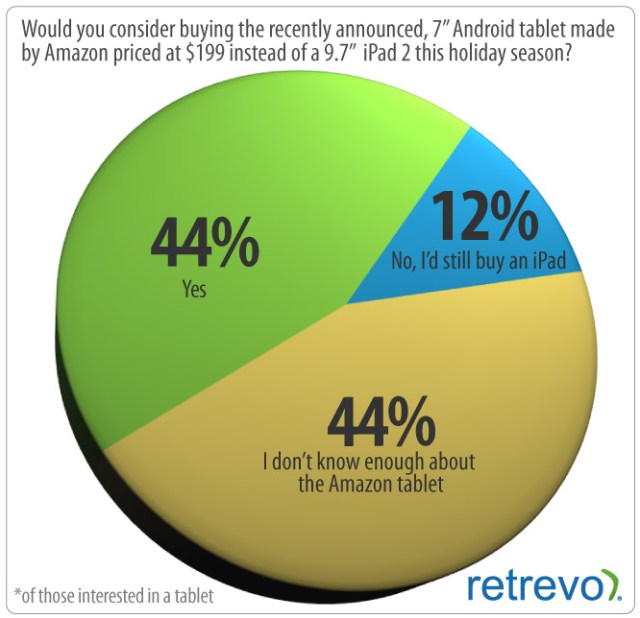 Tablets in all shapes, sizes and price ranges will greet shoppers this holiday season. The iPad currently reigns supreme, but can a more moderately priced, smaller device like the Kindle Fire win over gift-buying consumers?

The company polled 1,000 people in October on their tablet-buying intentions and found that, of those planning to buy a tablet, 44 percent would consider purchasing the $199 Kindle Fire instead of the iPad 2, which starts at $499. Then again, the same percentage of folks said that they didn’t know enough about the Fire, and 12 percent indicated that they would only buy an iPad.

Amazon’s greatest challenge, according to Retrevo, will be convincing shoppers that the Fire is a full-fledged tablet. Thirty-five percent of those surveyed perceive the Fire as just another Amazon e-reader.

Both studies are a bit short-sighted, and don’t include data on Barnes & Noble’s $249 Nook Tablet, a comparably priced alternative to the Kindle Fire. And considering that respondents were a price-conscious bunch open to a 7-inch tablet, the Nook Tablet could receive a favorable reception from shoppers as well. [Curious about how the two stack up against each other? Check out our head-to-head comparison.]

The debate over the most in-demand tablet will be settled soon enough. Both the Nook Tablet and the Kindle Fire will land on store shelves next week.