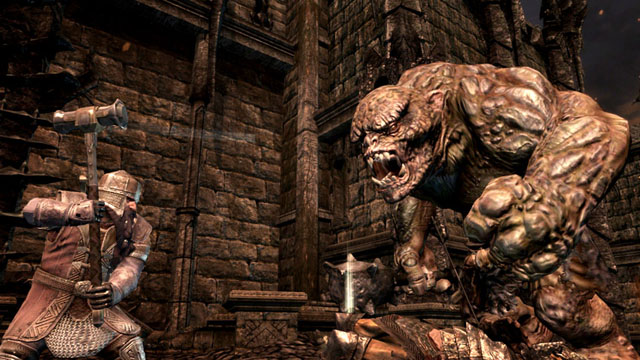 Lord of the Rings fans have been waiting a while for their beloved stories to meet a great game. So far, that hasn’t happened, at least not in some time. Electronic Arts had care of the franchise during the heyday of Peter Jackson’s movies, but not much came of it beyond a bad role-playing game and even worse 3D action games.

Now we have Lord of the Rings: War in the North, from Warner Bros. Interactive Entertainment and Snowblind Studios, a game that tries to do a little more than just get something out day and date with a movie. It’s better than the average, given the license’s troubled history. It’s just not quite good enough.

Snowblind’s bread and butter has been dungeon crawls in the style of Diablo. War in the North’s big idea is to marry that style to the cinematic approach of games like Gears of War. In theory, it’s not a bad idea, and at first it seems like the combination is going to work, but soon enough things fall apart. Eventually, it just boils down to another game of hack and slash and hack-slash some more. 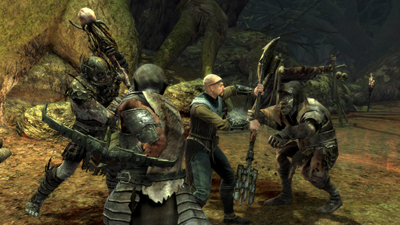 Welcome to the Dungeon
The people at Snowblind have been crawling through tunnels and caverns a long time. They first made their bones with Baldur’s Gate: Dark Alliance, a sharp dungeon hack sporting a gorgeous graphics engine from the early years of the PS2. Then they took a bit of a wrong turn with Champions of Norrath, a decently-conceived series that suffered from iffy execution – especially in the online mode – and the fact that no console gamer alive gave a lick for anything with the EverQuest name on it.

You can see where War in the North sets out to fix those problems. Online co-op gaming has come a long way on consoles now. The Lord of the Rings license still has some heat underneath it. You can see where the Gears influence comes in, too. Adding a close-in perspective and some story-driven flash seem like good ideas for shaking up the old kill-and-loot formula. At a very basic level, it’s not a million miles from some of the thinking behind Diablo III.

So from there begins the adventure. The notion is that our three heroes – an elven wizard, a human ranger and a dwarven ass-kicker, invented specifically for this game – are wandering around in the background of the story we’re all so fond of. While the Fellowship of the Ring moves south, they’re taking care of business up north, in Fornost, Mirkwood, the Grey Mountains, and other locales only known to serious Tolkien nerds.

The action takes place from a third-person view, but instead of using the high overhead perspective from Snowblind’s earlier games, the camera stays low and tucked in close behind the hero’s shoulders. At a first glance, then, this looks like a conventional 3D shooter or action game. Equipping and developing the heroes works more like Snowblind’s other productions, though, with skill trees to work through for each main character (granting special abilities and bonuses in combat) and a role-playing game (RPG)-style inventory that quickly fills up with lots of randomly-generated loot.

Gotta Loot ‘Em All
Not bad so far. Loot heals many wounds, and War in the North dishes out some fine loot. Everything a character wears or wields is visually represented on their gameplay model, from greatswords and bows down to gloves and boots, and those models always look sharp. Since they’re most of what we’re looking at through the bulk of the game, that’s a good thing. There’s not much opportunity to customize the items themselves, beyond occasionally slotting in “elfstones” that give certain items a bonus effect, but more complexity than that would probably add more fiddling in static menus than the game really needed.

That sort of thing distracts too much from the action, after all. War in the North tries not to break that up too much. In fact, the way the combat system works encourages a fluid, consistent, constant attack. Stringing together a lot of hits eventually grants a fighter bonus experience points. It also opens up the chance for especially punishing power attacks and finishing blows. Those come with even more extra experience (good) and tend to kill enemies a lot faster (even better). 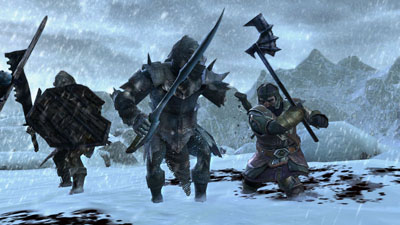 In the first couple of levels, it’s fun learning how to game the chain system. The extra experience is worth the extra effort, and the special kill animations look great, as the camera cuts in close and a touch of slow-motion shows all the gory detail of that orc’s head coming off. It’s similar to what Bethesda‘s Fallout and Elder Scrolls games do for critical hits, but the technical execution here is much smoother. The animations of the attacker and victim blend together well – if a sword goes through a leg, that leg is what gets severed – and the camera almost always puts itself in the best position.