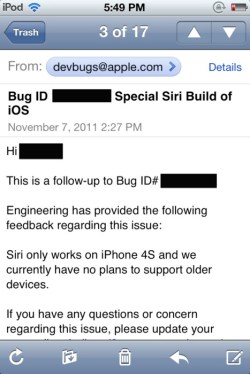 Sorry, classic iPhone owners. Siri won’t be headed to your device anytime soon. Apple confirmed, in a support email sent Monday, that Siri will only work on the iPhone 4S for the foreseeable future.

Siri is the voice-operated, sassy virtual assistant to the iPhone 4S. Her ability to schedule meetings, ponder the meaning of life and report back on weather conditions has helped make the iPhone 4S a commercial success.

Just don’t expect Siri to share the love with older iOS device owners. “Siri only works on iPhone 4S and we currently have no plans to support older devices,” Apple said in an email response to a bug report.

Michael Steeber, a Cult of Mac contributor, was alerted to the exchange and posted a screenshot of the deflating email (pictured left).

The news comes as no surprise — though it may shatter a few hopes and dreams.

If you’re still desperate for Siri on your device, you’re not alone. Hackers have attempted to port Siri to the iPhone 4, iPod Touch and iPad with moderate success. But Apple’s determination to keep Siri locked to its iPhone 4S host may only strengthen their resolve.