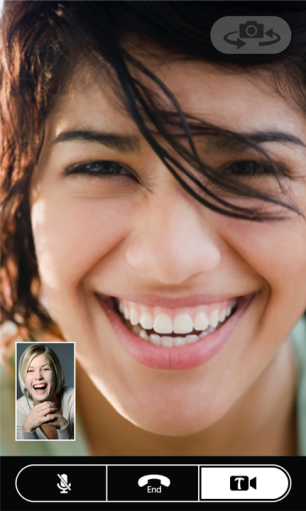 Windows Phone users will finally get their chance to video chat with their iPhone and Android friends, thanks to the hot video chat startup Tango.

The company’s new Windows Phone app, available for free on the Windows Phone Marketplace, is the first to bring video chat to the platform. (Yes, even Microsoft-owned Skype is still a no-show on Windows Phone.)

Just as with Tango’s apps for iOS, Android, and Windows, the Windows Phone app will let you make free voice and video calls to other Tango users across platforms. The app only works on devices running the new Windows Phone 7.5 update (codenamed Mango), and it’ll perform best with new handsets that feature front-facing cameras, like the new HTC Radar and Titan.

The new app is just the latest example of Tango’s unstoppable growth. The service launched a year ago and already has 24 million users. As we reported last month, Tango’s growth is powered by its lightning-fast two-week development cycle, which forces the company to get updates and new features out quickly.

Windows Phone users are also eagerly anticipating the official Skype app for the platform, especially now that Microsoft has completed its massive $8.5 billion Skype acquisition. Skype will likely end up being a flagship app for the platform, thanks to its massive user base and impending integration with the Xbox 360, but Tango has the advantage of being on Windows Phone first.

Palo Alto, Calif-based Tango has raised a total of $47 million in two rounds of funding.