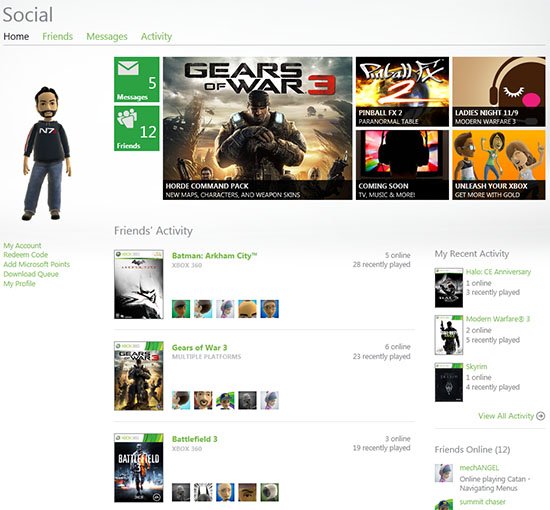 Microsoft is adding new social and video interface designs to its Xbox.com dashboard, which mimics the company’s upcoming metro-style UI available in Windows 8.

The new Social section replaces the current “My Xbox” portion of the website. Microsoft said the update will make it even easier to see what your friends are doing on Xbox LIVE as well as provide early access to new features in the Xbox 360 dashboard update, such as the Beacons feature (which lets you mark games you want to play with others).

The new social section will alert users to Xbox Live events, preview articles for upcoming games, new releases in the Xbox marketplace and more. It’s also the place where users can see who else is online — basically a buddy list of friends, family and acquaintances.

The changes to the site are meant to make playing games more social by applying the same elements of communication that people use through instant messenger and social news feeds (from sites like Facebook).

Microsoft is also adding a new video section that lets you browse the Zune video catalog. Any videos you purchase can then be added to a queue for future viewing via Xbox 360, Windows Phone, or a Zune media player.