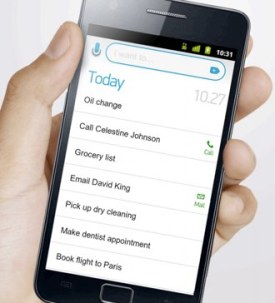 Taskos became an accidental hit and attracted 1.3 million users, who now create hundreds of thousands of tasks each day. The startup claims that it’s the most popular app of its kind on Android — and that’s what got investors salivating.

“We have a killer team … we’re tackling a huge market … and we came with proof,” Any.do CEO Omer Perchik told VentureBeat. “The combination of the three got us [the] funding.”

Any.do managed to get Eric Schmidt’s Innovation Endeavors, Genesis Partners, Blumberg Capital, Joe Lonsdale at Palantir and Aydin Senkut at Felicis Ventures, which is an investor in VentureBeat, to participate in its first round of funding.

Now, Any.do for Android, a free mobile app hitting the Android Market Thursday, will be the company’s key product moving forward. It comes with three particularly drool-worthy features — shareable tasks, contextual autocomplete and a simple but elegant interface — that set it apart from similarly-purposed applications, including Apple’s new Reminders application for iOS 5.

You can also interface with Any.do using your voice, drag-and-drop tasks, sync with a Google account and choose themes to personalize the experience.

A similar application for iPhone is said to be several months away from release.

“We invested in Any.do because of the strong team and their vision to take the productivity space beyond the task list,” Dror Berman, managing partner of Innovation Endeavors, said of the firm’s interest in the to-do list app maker. “Any.do’s core technology understands people’s intent, and leverages the mobile phone to not just make a list, but to actually get things done — anytime, anywhere.”

How Any.do will profit with its nifty little application is anyone’s guess. Perchik says the startup has a few business tricks up its sleeve, but he isn’t ready to reveal those plans just yet.

As for Taskos, the startup will eventually let users port over their tasks and lists to Any.do, but its ultimate fate remains uncertain.

Ten-person Any.do is based in Israel and has an office in Palo Alto.