Launching publicly today, Identified is a professional social network for adults younger than 30, that’s built on top of Facebook and backed by $5.5 million from Google’s Eric Schmidt, Tim and Bill Draper and Alexander Tamas of DST.

What Identified hopes to do is create a rich and engaging dialog between young job aspirants, based on their personal and professional data, and potential employers. Identified is different from LinkedIn in that it’s not just a collection of static profiles.

“It’s a game mechanic, but I think the key is to connect the game mechanic to something real,” Identified co-founder and chief executive officer Brendan Wallace told VentureBeat. Instead of, say, giving badges, Identified helps young people get in touch with potential employers. And because it’s a professional network built on top of Facebook’s social graph, Identified has loads of info about elusive twenty-somethings. It can use that information to do a better job of matching companies with the best candidates.

The idea sounds great, but it comes off as icky. Here’s why.

After a briefing with Wallace, I set up a profile on the site so I could see how it works in practice. I was quite disappointed by the level of privacy offered as a default, and ended up unintentionally posting a chart to my wall with my friend’s Identified scores (think Klout scores for helping recruiters). I had been careful to uncheck a box that would have invited all my friends to join, or so I thought. 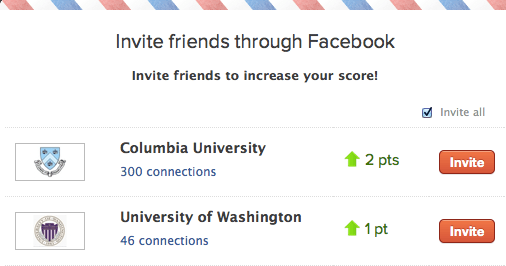 I contacted Wallace for clarification and he said that a second “module” during the sign-up generates the ranking chart after users have unselected the Invite All tab. It’s a new feature, he assured me, and one that boosts Identified posts’ engagement and edge rank, which is the Faecbook algorithm that determines a post’s popularity in the News Feed.

“Most users actually really like sharing their rank and our growth has skyrocketed because there has been so much discussion and ‘liking’ around these posts,” said Wallace via email, but he added that due to similar comments he’s heard, the feature was likely to be removed.

Below is a screen shot Wallace sent, showing the second module with the button checked by default. Notice the difference in size, and position of the “See your rank button,” and the opt-out checkbox.

Identified has some pretty impressive stats for a young company. Wallace said that more than 1.8 million profiles have been viewed on the site since its launch in September, and the database includes more than 50 million profiles.

The Identified interface is one of the cleanest and most intuitive I’ve seen recently, with ample negative space that makes the signup process friction-free and fast. That’s why I don’t understand hiding opt-out buttons, and have a hard time believing this was a last-minute feature addition.

With money from from former Google CEO Eric Schmidt, as well as DST, investors clearly think Identified is onto something big. The point, of course, is not just to help students get jobs, but to sell student data to recruiters, who would pay for access to the best candidates. While Klout and others like it have systematized online influence within social media communities, we’re a long way from the average Internet user understanding and appreciating what this means. With the job search, the returns are far more immediate and unmistakable: Find a job, get paid.

But when user data is involved, startups walk a fine line. On the one hand they’re providing users a free service. On the other, this means users are the product, and people who want their data, in this case recruiters, are the customers.

It’s reasonable to assert that the so-called “social media generation” has a different expectation of online privacy, but I don’t feel like this is what I’ve experienced with Identified. Getting students and job seekers excited about selling their data to recruiters through games can be a lucrative business, and deserves to be handled the right way, with ample disclosure and privacy options. That’s not what I’m seeing here.