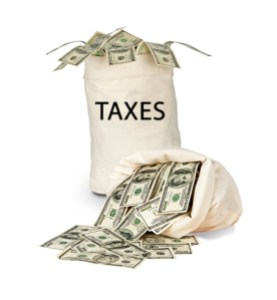 Major online retailers are divided over a new piece of legislation that seeks to clarify the murky issue of charging sales tax for purchases made on the web.

Currently, several states only require customers to pay a sales tax on purchases made online if the online retailer has a physical retail store address within the state. But retailers that operate entirely online, like Amazon, only have shipping/service centers and not actual stores, which has allowed the company to evade charging its customers a local sales tax in some cases. This gives online retailers an advantage over direct competitors that operate both on the web and through physical stores  — meaning customers get a better deal when shopping online. It also means state governments miss out on billions of dollars in tax revenue.

The bill, called The Marketplace Fairness Act, was introduced Wednesday by U.S. Senators Lamar Alexander (R-Tenn.), Dick Durbin (D-Ill.) and Michael Enzi (R-Wyo.). If passed, the new law would give state governments two ways to collect sales taxes from online purchases. The first way requires U.S. states to sign a multi-state legal agreement that would bring each of their sales tax codes into conformity. The states can then compel online retailers to charge or remit a sales tax. States that don’t sign the legal agreement can still force online retailers to collect sales tax on purchased goods if they adopt some minimum standards to simplify their collection process.

All sellers with annual sales less than $500,000 are exempt from collecting individual state sales taxes under the proposed bill.

Amazon has come out in support of the Marketplace Fairness Act, which is likely because the company has already successfully negotiated deals with some states that allows them to continue not charging sales tax (despite operating a shipping or service center within the state).

“Amazon strongly supports enactment of the Enzi-Durbin-Alexander bill and will work with Congress, retailers, and the states to get this bi-partisan legislation passed,” said Amazon VP of Global Public Policy Paul Misener in a statement. “It’s a win-win resolution—and as analysts have noted, Amazon offers customers the best prices with or without sales tax.”

However, other online retailers — eBay in particular — have come out against the new legislation. EBay has nothing to gain from the bill since the majority of its money comes from fees it charges smaller sellers for using its online auction site. Depending on the state, the individual sellers are usually responsible for collecting sales tax from their customers. It also doesn’t have the agreements with states to waive sale taxes like Amazon does.

Regardless of the new legislation’s advantages and/or disadvantages, the U.S. federal government is badly in need of an updated method of collecting sales tax in the new age of e-commerce.