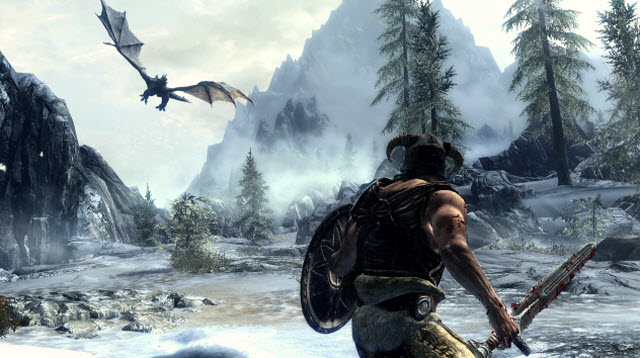 The Elder Scrolls V: Skyrim is the latest blockbuster hopeful from developer/publisher Bethesda Softworks. Following in the footsteps of the studio’s previous award-winning open-world role-playing games Elder Scrolls III: Morrowind, Elder Scrolls IV: Oblivion and Fallout 3, Skyrim avoids tacked-on multiplayer and overpriced rainbow-colored launch day weapon DLC in favor of delivering the most rich and compelling single-player experience in video gaming history, a rare goal in a market dominated by competitive online titles such as Halo and Modern Warfare. Was Bethesda up to the ask? The answer is both yes and no.

Terrible first impressions
After over 80 hours of dungeon-crawling, dragon-slaying, and potion-making, I was finally ready to write my Skyrim review. Although I literally lost five pounds (out of a total of 145, mind you) from not eating or sleeping while playing Oblivion when it was first released in 2006, Morrowind for the original Xbox and PC still stands as my most memorable Elder Scrolls title. There’s something about building pillow forts, summoning Golden Saints and delivering writs that leaves a warm fuzzy in my stomach. So I’m very familiar with the series, and while I simply wanted this latest chapter to be a good–hopefully great–game, it’s hard for anyone not hiding under a rock to avoid Bethesda’s infernal hype machine. “Radiant AI” this and “Creation Engine” that. It all creates a certain expectation that, technically, Skyrim is going to blow away not only anything that Bethesda has ever done, but everything else on the market as well.

Skyrim gets off to a rough start, with an on-rails prologue displaying some of the game’s worst graphics. It’s a terrible way to start off a game that promises so much, and I’m surprised that the opening hour, considering how linear it is, isn’t the most polished piece of the entire package. Even if you can look past the pixelated shadows, weak dialogue, and ho-hum scripted sequences, you’ll soon learn that Skyrim takes one of Oblivion’s cardinal sins and runs with it. In Morrowind, you could kill everyone. If you wanted to exterminate every citizen, villager, and straggler in the game world, you could, even if that meant permanently breaking a main quest. It didn’t matter, that freedom was yours. In Oblivion, Bethesda saw fit to limit that freedom; pivotal characters would simply be knocked unconscious whenever you went on a rampage. But they’d eventually recover and all would be forgiven. Now, in Skyrim, some characters won’t even acknowledge that you’re standing there hacking away at them with an axe. The man who guides you through the opening scene can have six arrows sticking out of his head without so much as interrupting his exposition to ask that you kindly stop doing that. Combined with the underwhelming visuals, and I had this creeping feeling that I had been duped.

Seeing characters not react realistically to events and damage rips me out of the intended immersion. And yes, there are some very rough patches in the graphics throughout the vast world. The much-touted animations can be particularly wonky, but there are also some extremely notable textures that stand out, not just compared to the rest of the game, but compared to all other games from 2011 as well. It’s almost as if you can chart which areas or items were created earlier in development and then never retouched to meet the game’s generally high standards.

Dragons should be fearsome, not target practice
Although superior to Oblivion in scope, variety, and production values, I was left feeling like Bethesda chose to refine the wheel rather than revolutionize it. This decision is not necessarily a bad one, but it is somewhat disappointing given that the Elder Scrolls franchise sees a new release once every five years. That being said, Skyrim does make some sizable additions to the formula, with the implementation of dragons being the most notable. These colossal winged beasts play an integral role in the main storyline, as well as the game world itself, but their execution is not quite what Bethesda promised it would be. Like the Big Daddies in BioShock, dragons should be intimidating entities that give the player serious pause as to whether or not it’s a battle worth engaging in. But like the Big Daddies in BioShock 2, I quickly found myself darting across the land anytime I saw one in the distance, hoping I got there in time to slay it before it ran away. Aside from a few troublesome encounters where I was caught out in the open with no protection, dragons never really put up much of a fight. Instead, I eagerly rushed them all, frothing at the mouth to harvest more valuable dragon bones so that I could buy myself pretty things.

While there are a few non-generic or story-related dragons, the majority are all nameless Frost and Blood Dragons, or literally just “Dragon.” And they’ll never stop spawning, regardless of what events unfold throughout the main quest. Of the 30+ dragons I’ve slain, only a few were memorable, delivering a remotely exhilarating experience, even if the challenge wasn’t there. But more often than not, they were deftly felled like any other enemy. I once killed a dragon in the forest only to have another dragon immediately land next to us and start attacking. I killed the second one in less than 20 seconds with repeated blasts of my most powerful lightning spell and harvested his bones before his body had even fully hit the ground, then carried on without a second thought to go find more butterflies for my alchemy. Speaking of spells, lightning not only drains health but magicka as well, meaning it’s entirely possible to eliminate a dragon’s ability to breath fire altogether. If you’re at a distance, they’ll just dry heave at you. So frightening! 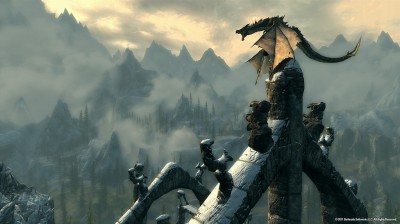 Then there was the time that a dragon literally dropped out of the sky dead before I even knew it was there. What killed it? I’ll never know. If you do find yourself having trouble with dragons, you can always lure them towards a tower or city. The guards and even common peasants will all take up arms, helping to deplete its health in record time. If there aren’t any cities around, you have a fairly good chance that the dragon will waste its valuable final moments attacking mudcrabs or wolves while you blast away at it from safety. Whatever you do, just don’t stand directly in front of one….

The already-questionable animations in Skyrim are at their worst when it comes to the dragons. What are allegedly totally dynamic battles have very clear scripted events. Generally speaking, when you kill a dragon it just dies where it stands. But there are a few battles where the dragon’s health bar will disappear preventing it from taking further damage, then it will fly away and circle around for a pre-determined crash landing (which usually results in the game turning into a slideshow for a few seconds). It’s very poorly implemented, and the animations for this sequence are usually horribly unpolished and glitchy.

Ultimately, the game benefits from the inclusion of dragons because, even in the disillusioned state they’re in, there’s something awesome about seeing the wings of a massive dragon flapping in the distance and hearing its roar as it zones in on you, or prepping your arsenal and potions as you zone in on it. I’m left wishing Bethesda had done a better job, but at the same time, even if your pizza is cold and has anchovies on it, you’re still getting pizza.