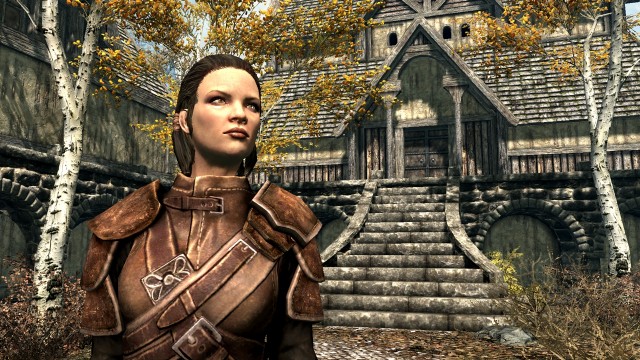 It’s dangerous to go alone
An adventure as deep and lengthy as the virtual lifetime possible in Skyrim can get quite lonely. While many may go their entire playthrough without ever using a companion, they’re actually a very integral part of my role-playing experience. Previous Elder Scrolls titles and Fallout 3 both have had companion systems, where various NPCs (non-playable characters) could join you on your many quests, aiding in battle and usually lugging around any extra items you don’t feel like carrying yourself. Skyrim has quite a few sidekick options to choose from, whether it’s paid mercenaries, loyal friends, or even your own personal protectors obtained through story events.

In the beginning they tend to be quite useful, usually being a bit more powerful than yourself and helping to lay waste to any who would oppose you. For squishy characters like a mage or thief, they can act as tanks, allowing you to add support fire or healing from a safe distance while they do all the heavy lifting. Finding the right companion or hireling that suits your play-style will help give you the optimal setup, but like with the dragons, the companions are far from perfect.

For starters, their artificial intelligence (AI) is questionable at best. They will often stand in doorways and refuse to move, trapping you behind them. (I found shutting the door and then opening it again can sometimes force them out of the way.) They will trigger traps in dungeons and then just stand there as you or they are hosed down by flames or poison arrows. You can talk to them to give them orders, but it’s far too slow of a process to be useful and it has very limited purpose. You can tell them to attack something or move to a specific spot, but if you attempt to take any action of your own (such as defending yourself from an enemy) you will cancel their order. It’s a poorly implemented feature that I never really found a use for, but had it been designed better I could see it being one of the more fundamental elements of the companion system.

There are also horses and I even had a war hound (the ugliest dog ever). Every horse I’ve ever owned had an insatiable lust for battle, as it would come charging in to attack nearby enemies, usually getting itself murdered in the process. Not only is that $1,000 down the drain, but I then have to walk back to the nearest city and explain to the stablemaster what just happened for the fifth time.

It’s strange that most characters in the game do not use horses for some reason, and neither do your companions, meaning anytime you’re traveling it takes a while for them to catch up to you. Accidentally rushed into a bandit camp? You’re on your own. As soon as you’ve killed everyone yourself, your companion will come running up like the cops always do at the end of an action movie. You should be able to put a bell on them, since half the time you have no idea where they are and the other half they’ll suddenly be standing right behind you in a dark, creepy cave.

Lastly, Skyrim adds the ability to get married. I wed a red-headed lady from the city market because 1) I have ginger fever and 2) I had to slay a freaking woolly mammoth to gain her favor. After the ceremony I moved into her house and she offered to cook me dinner each day. I kept expecting something more to come of it, but it never did, so eventually I summoned a fire elemental to kill her and then ransacked her home for some extra potatoes and moved out. Another half-baked idea that could have, and should have, been so much more. 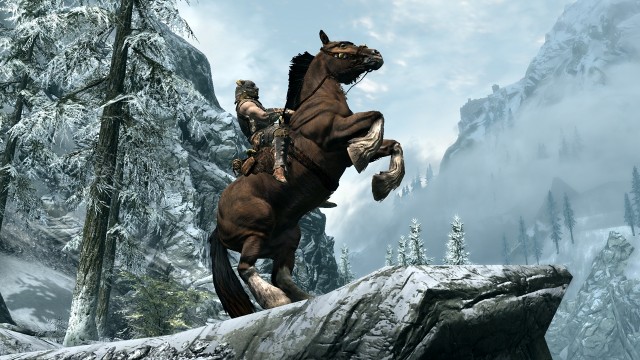 The Thief
Skyrim’s revised class system is broken up into three different build types: the warrior, the thief, and the mage. There are 18 different skill trees with six correspond to each of the main class types. Warriors are proficient in melee combat, blocking, and blacksmithing, for instance, while thieves are better at lockpicking, archery, and alchemy. There’s a lot of room for variation though, as unlike Oblivion where you had to choose your roles and skills before even starting the game or fully understanding their value, Skyrim’s skills develop naturally as you use them. Likewise, if you don’t ever wield a two-handed weapon, you won’t gain experience in that particular skill, while the ones you do use will steadily progress towards the Master rank.

For my first character I chose to be a weathered male Wood Elf named Azazel. Wood Elves make particularly good thieves and archers with the natural ability to control wild animals. Since this was my first time around, I foolishly took on every quest I was given, regardless of importance. Quite quickly my world map became congested with countless objective markers. From people needing an item delivered, mysterious legends that needed investigating, or even dragons that had been harassing a certain area. And of course, along my way I had to stop and rob every house and pickpocket every person I came across, eventually making my way to the run-down city of Riften where I was offered a place in the dwindling Thieves Guild.

By then I had built up my sneaking skills enough to where I could open any lock, lift items off any person even while standing in front of them, and slither through homes and shops almost completely undetected. My archery skill also allowed me to silently kill most enemies before they even knew I was there, and through alchemy I had created powerful poisons to make my arrows even more devastating. I had adopted a war hound for a while, but it never stopped howling, even when I was sneaking around a city after-hours or trying to talk to someone. The AI seemed completely ignorant to the strange dog barking in their home, but I was utterly annoyed, and eventually pitted the dog against a dragon to end my suffering. Sadly, and I’m not kidding, the dog came out victorious, though I didn’t witness the actual battle myself because I was looting nearby treasure chests. Soon after that it was killed by a lone ice wraith, and all was peaceful once more.