The Mage
After 30 hours of sneaking around in the shadows, I realized that a great deal of the quests and storylines didn’t make sense for Azazel to partake in. So I created a High Elf named Danica. High Elves are particularly potent magic users, so I immediately joined the magical College of Winterhold, something I had wanted to do all along to gain access to the best conjuration spells.

With my mage, I also took sides in the ongoing civil war between the Stormcloaks and the Imperials. Stormcloaks just sounded cooler so I sided with them, and soon found myself sieging cities and forts. The fort takeovers were not particularly epic, instead requiring me to deplete the enemy forces who would continuously spawn until the meter reached zero. Full-on city sieges were a bit more cinema-worthy, but ultimately felt anti-climactic. The civil war itself seemed fleshed out, but the quests built around it were not. 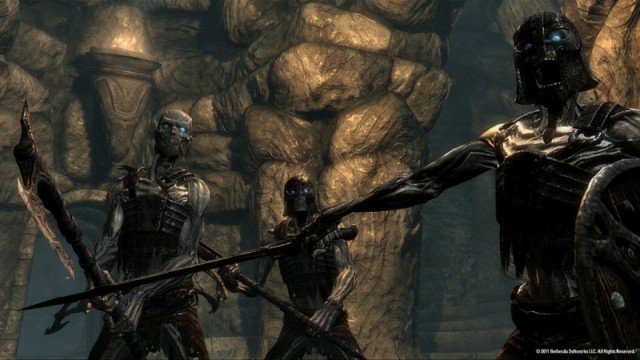 All the while I was finally moving the main storyline to its conclusion, and unlocking a great deal of unique abilities known as Shouts (the language of the dragons) in the process. Shouts can be used at any time, but require a cooldown before being used again. Some summon legendary heroes or allies, while others freeze enemies solid, or bring time to a standstill for everyone but yourself. My favorite Shout is undoubtedly the one that allows you to summon a violent storm which assaults your enemies with lightning. It is easily one of the coolest moments in the game, and it can be activated at will.

Unfortunately, as my mage went from a lowly, weak novice to a grand sorceress, I encountered what I perceive to be a devastating flaw: Companions can be permanently killed only by friendly fire. If an enemy downs your companion, they will simply fall to their knees for a moment before recovering. But if an enemy lowers their health and then you accidentally splash some area of effect damage on them, they are killed. With a warrior and a thief it’s not so much an issue, but when dual-casting powerful chain lightning spells that jump from target to target, or explosive fire spells that rumble the screen upon impact, collateral damage is an inevitability. Eventually I got so tired of reloading my last save to prevent the death of my beloved warrior Lydia, that I swore if she died again I would just leave her behind and begrudgingly move on with my life.

Sure enough, after a three-way battle between a random Imperial camp, Lydia and I, and a dragon, I’m left waiting for her to catch up to me. But she never comes. I scour the entire area until I come across her crumpled body almost a half mile back, where the battle first started. I accidentally killed her and didn’t even notice, and I had customized her armor to be far better than what anyone else was wearing at that point in the game. I know I complained about not being able to kill everyone in the game earlier, but why would my chain lightning jump to a friendly target? It’s clearly an oversight, and as I stripped Lydia down to recover my items and enchanted armor, I felt as though Thane had died during the suicide mission in Mass Effect 2. 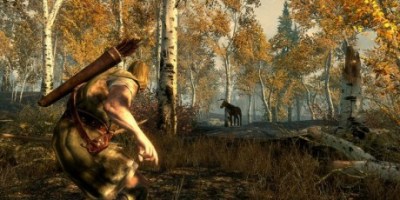 Eventually I became such a powerful conjurer that I could maintain two elementals at the same time, including a Storm Atronach which was immune to my lightning spell spamming. And they would come in handy, as I soon decided to run around the outer perimeter of the entire northern continent of Skyrim. The developers have stated that the game world is roughly the size of Oblivion, but far more dense. I found that traveling by foot wasn’t too bad, even if something initially seemed to be miles away. And it was here that I really started to take in the sights of Skyrim. I stand by my claims that some of the visuals are blatantly not on par with the rest, and you will see them too, but more often than not, I would exit a dungeon and look up to see a mesmerizing aurora lighting up the night sky or some other equally awe-inspiring sight. Even during the day there are so many scenic moments and beautiful vistas stretching as far as the eye can see that I literally stopped whatever I was doing and just looked around, taking it all in. When’s the last time a video game actually got you to do that?

Skyrim could benefit from a little more variety in the enemies (or at least the variations of their appearances) and the wildlife, though.

The Warrior
My third and final character, Donut, the fierce orc warrior, cared not for shiny things like Azazel or unlocking the mysteries of the world like Danica. Instead, he cared only for bloodshed and earning glory on the battlefield. For Donut, I chose the path of the Companions, Skyrim’s equivalent of Oblivion’s Fighters Guild, with some interesting twists that should please longtime fans.

Straight sword-and-shield combat can often be boring in action adventure games, but Bethesda has added some flair to make this role more interesting, or at least more flashy. When delivering a killing blow, warriors will often do a special fatality move. These are actually pretty impressive, especially considering my usual disdain for the quality of the animations in Skyrim, though the camera does get a little hectic during the executions. Overall, the warrior felt like a far less vulnerable build, perhaps best for newcomers, but also a less versatile one, and for that reason I quickly shifted back to my thief and mage.