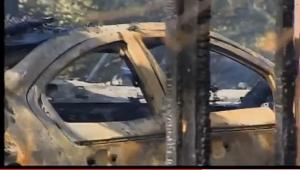 Brace yourselves, electric-car advocates, for another possible round of alarmism and superficial reporting about fires in plug-in cars.

A Bloomberg story from Friday highlights a third fire involving a Chevrolet Volt range-extended electric car–only 7,500 or so of which are on the roads today.

The latest case occurred in June in a Chevy Volt that had been crash-tested by the National Highway Traffic Safety Administration. The car was subjected to a side-impact “pole test,” which not only destroyed the car but cracked the battery pack housed in the center tunnel and under the rear seat. Then, as per the standard test procedure, the car was put on a rotisserie and rotated 90 degrees every five minutes to test for any fluid leakage. Coolant leaked out of the battery pack, though the electric components stayed put.

Fully three weeks later, the wrecked Volt caught fire in an open storage yard in Wisconsin, with the flames ultimately spreading to surrounding cars. After news of the fire, both Chevrolet and the NHTSA independently replicated the crash test and subsequent vehicle rotation procedure. In neither case could they reproduce the conditions under which the battery pack ignited.

Electric vehicles not “at greater risk” of fire

Months later, the NHTSA doesn’t appear to view the fire as terribly alarming. It has given the Volt a five-star safety rating, and the IIHS designated the Volt a Top Safety Pick as well. “Based on the available data, NHTSA does not believe the Volt or other electric vehicles are at a greater risk of fire than gasoline-powered vehicles,” the agency said in a statement today. “In fact, all vehicles — both electric and gasoline-powered — have some risk of fire in the event of a serious crash.”

Nonetheless, novelty and lack of public knowledge is likely to make any conflagration noteworthy if there’s an electric car nearby. 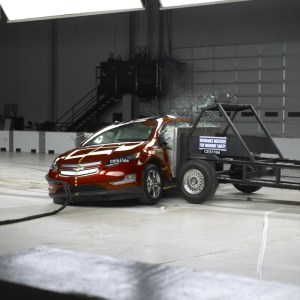 The immediate concern, the agency noted, was to ensure that first responders, tow-truck operators, salvage yards, and even dealerships that handle wrecked electric cars understand what must be done to ensure safety. GM has been training first responders how to approach crashes involving electric cars for more than a year, since before the 2011 Volt went on sale last December.

It is also developing procedures for all parties on how to remove lithium-ion battery packs from wrecked Volts to alleviate any potential of long-term fire risk.

Garage fires, with Volts inside

The two previous fires with Chevy Volts involved were in Mooresville, North Carolina, just last week, and in Barkhamsted, Connecticut, last April. Both occurred in garages that happened to house Chevrolet Volts. In the Mooresville case, a Volt was charging in the garage at the time of the fire–leading local electric utility Duke Energy, in a surfeit of caution, to advise electric-car owners not to plug in their cars to charge until the cause of the blaze had been established.

No conclusion has yet been drawn by local fire officials, but GM sources–none of whom would go on record–seem confident that the Volt will not be deemed to have been a cause of the blaze.

As for the Connecticut blaze, the fire marshal’s report concluded the Volt that was parked in the garage had nothing to do with the cause of the fire. It was sitting next to a Suzukiconverted by the home’s owner to a battery electric vehicle.

Keeping an eye out

With electric cars slowing spreading into the market, manufacturers and regulators alike will be keeping a very close eye on any fires with electric cars nearby. The NHTSA’s statement concludes, “As manufacturers continue to develop vehicles of any kind — electric, gasoline, or diesel — it is critical that they take the necessary steps to ensure the safety of drivers and first responders both during and after a crash.”

Given that there are 250,000 or more fires in gasoline vehicles every year, the sample base seems too low to draw any useful conclusions about electric cars and fires thus far.

For everyone’s sake, let’s hope it stays that way.

This post by John Voelcker originally appeared in GreenCarReports, one of VentureBeat’s editorial partners.