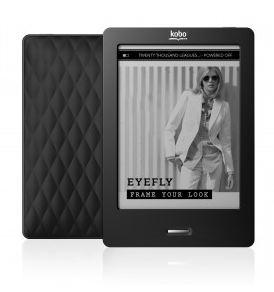 There’s yet another $99 touch e-reader joining the fray this holiday shopping season. Kobo has announced its $99 Kobo Touch with Offers, which is the same device as a regular $130 Kobo Touch, but the screen will display ads when it is in sleep mode or turned off, as well as in what the company mysteriously refers to as “discreet places.”

The 6-inch e-reader will be a direct competitor to Amazon’s Kindle Touch with Special Offers and Barnes & Noble’s Nook Simple Touch. All three are $99 e-ink touch devices with 6-inch screens that display content in 16 levels of grey. Sony also has an e-ink product, the $130 Sony Reader Digital Book, and Amazon carries the $79 Kindle, which doesn’t have touch navigation.

Because the hardware is so similar, consumers may end up choosing between the products based on their familiarity with the content ecosystems. The Kindle benefits from its association with Amazon’s giant collection of e-books. The Nook has the Barnes & Noble name and library in its corner. Barnes & Noble is also hoping its new free, in-store customer service centers will appeal to gadget lovers used to Apple’s Genius Bar.

Kobo, however, isn’t as well-known of a name in the U.S., even though it has deals with large book chains in Canada and Europe. Just last week, the Canada-based e-reader manufacturer was acquired for $315 million in cash by Rakuten, the largest online shopping mall operator in Japan, which may help the reader become an international hit. As for this season’s e-reader wars in the U.S., it’s still a scrappy underdog.

The Kobo Touch does offer a few unique features. It can support more file formats than the competition, including HTML, RTF and various image files. And its “Reading Life” feature gives you awards for reading and collects stats on your reading habits.

The Kobo Touch with Offers is only available in black and to customers in the U.S.

Kobo, Amazon and Barnes & Noble are also battling it out on the 7-inch Android tablet front, with similarly featured and priced devices. For a look at how those tablets compare, check out this chart.