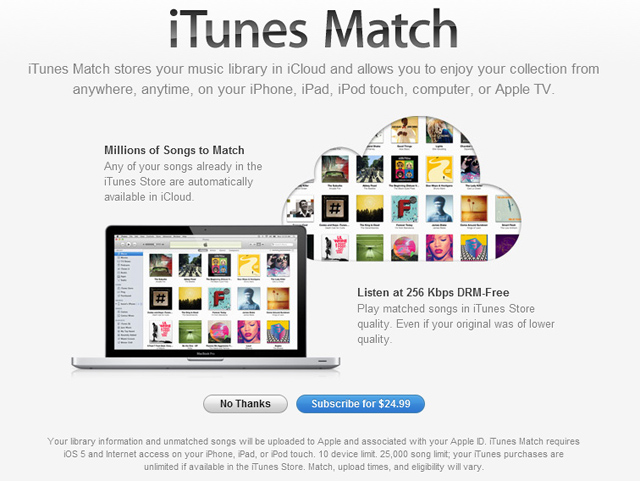 Apple launched its anticipated iTunes Match music service yesterday, two weeks after the company initially said it would release it. Most likely, the debut was delayed to address bugs, but Apple should have waited longer to fix more issues because it isn’t yet ready for the spotlight treatment.

When Steve Jobs announced iTunes Match and iCloud at WWDC in July, I was excited for it. The promise of access to all of my music across all of my devices for $25 a year? Sign me up! Basically, Apple would make it possible to listen to my 100GB music collection anywhere, and my older crappy-sounding ripped music from CDs would get upgraded to 256 kbps sound quality.

But in practice, it’s not quite that simple, and it doesn’t “just work.” iTunes Match takes too much time to set up, some songs simply don’t work and it still has too many bugs, such as playing the wrong songs.

How to set up iTunes Match

iTunes Match works by scanning your entire iTunes library to see which songs it already has a copy of in its iCloud. If you have files that aren’t already in Apple’s database, iTunes Match uploads them along with any artwork. Apple has 20 million songs in the iCloud, so in theory you won’t have to upload many files.

To get started, you’ll need to upgrade to iTunes 10.5 for Windows or Mac, which was released yesterday. Once it’s installed, go into the new iTunes Match section under “Store” on the left column. There you’ll see a screen that lets you subscribe to iTunes Match for $25 a year. Enter your Apple ID to pay, and then the painstaking process can begin.

Before taking the plunge into iTunes Match, make sure you carve out some time. It doesn’t automatically turn on and will almost certainly take several hours to set up.

The process is divided into three stages: first it scans your library, then matches songs in your library with files in its database, and finally it uploads any songs not already in the iCloud. Because I have more than 18,000 songs in my iTunes library, the entire process actually took 12 hours to complete. iTunes Match’s matching and uploading process hogged my Windows PC’s resources while it worked, and it made my computer noticeably slower. (See the photo below for what the screen looks like while you’re uploading tracks.) 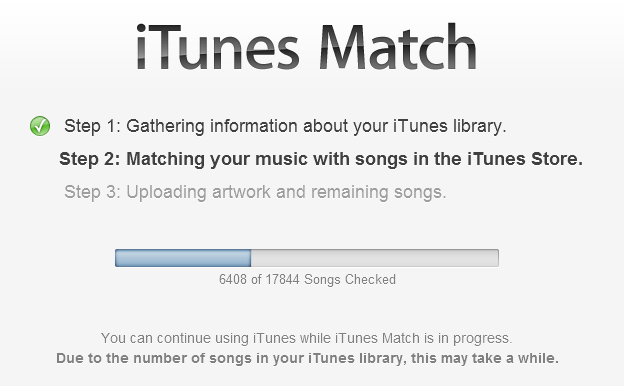 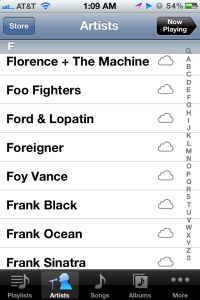 Testing iTunes Match on an iPhone

Once it was set up, I used my iPhone 4S running iOS 5.0.1 as my primary test device to see how well iTunes Match worked.

To enable iTunes Match in iOS, go into Settings > Music and turn on iTunes Match. When you turn it on, the device warns you that it will delete all of your local files, but that’s entirely not true. Your local files stay on the phone and the feature is smart enough (most of the time) to not delete songs you already have on the phone. My iPhone 4S battery drained quite a bit while the service was downloading the iTunes Match information in the background.

Because iTunes Match is not a streaming music service like Spotify, MOG and Rdio, all of your tracks are accessible via download over a Wi-Fi connection. Once the process of matching was complete, my iPhone’s “Music” application was filled with artist and album entries that weren’t there previously. Inside the Music app, artists have a cloud icon next to them that indicate they are part of the iTunes Match system. Selecting an artist or album will show you a list of songs with iCloud icons next to them as well. If you tap the cloud icon next to a song or the song title, it will download the song directly to your device.

The problems and limitations

There are numerous iTunes Match problems I noticed right away. First, song matching and song availability are spotty. Because you’re relying on Apple’s “smart” software to read all of your songs, not everything in your library is going to get matched. Sometimes a whole album gets matched without an issue, but other times only half the songs on an album get matched. To find out the state of your matched songs in iTunes, open iTunes on your main computer and right click your library. Place a check mark next to “iCloud Download” and “iCloud Status” to see the status of your matched songs. 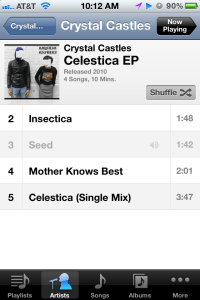 The matching spottiness also produced weird bugs on my iPhone. When I’m using the iPhone’s Music app, certain songs I used to have access to have now been grayed out. I can’t listen to them by tapping on the song, but sometimes I can listen to that grayed out song by playing the song before it and the grayed out song will play next in the queue. (See the photo to the left to see a grayed out track magically playing on the phone.) Additionally, sometimes I’ll tap one song in the Music app and another track from the same album will play instead.

Another problem is the limitation on the number of songs you can use with the service. If you have more than 25,000 tracks in your iTunes library, iTunes gives you the following message: “To participate in iTunes Match, your library must have 25,000 songs or fewer.” It is still possible to use iTunes Match, but you’ll have to do a frustrating workaround, which will give you access to exactly 25,000 of your tracks, but no more.

A final perplexing issue is mass song downloading and mass deleting. There is no way to download an entire iTunes library directly to your device using a single tap. You can download albums with one tap, but you can’t download a single artist’s catalog or every track you own. Additionally, the process for deleting songs or albums from the device isn’t obvious — you have to swipe sideways on an album or song to bring up a delete option.

All of these issues make me feel as if Apple should have waited a little longer to launch iTunes Match. I’ve written before that iCloud will be one of the most important products for Steve Jobs’ legacy — it realizes his dream of a connected Apple ecosystem in terms of content. iTunes Match, an integral part of the iCloud puzzle, could bring that idea much closer to becoming a reality. Sadly, it’s not quite there yet.