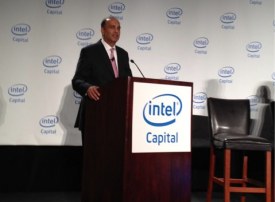 Intel Capital, the veteran investment arm of Intel, has announced the AppUp fund to invest $100 million in companies creating applications and digital content for multiple devices. The organization revealed the new fund today at the Intel Capital Global Summit in Huntington Beach, Calif.

The AppUp fund is named after Intel’s AppUp app store and is intended to enhance the selection of availalbe applications and content. The AppUp store is currently for Windows users only and includes more than 5,000 applicaions, but the company plans, by way of the fund, to expand the marketplace, make it globally accessible and offer applications for all mobile and desktop platforms.

Intel Capital has invested more than $10.4 billion in around 1,100 companies across 51 countries. The organization has a made a strong commitment to mobile, and finances startups across the ecosystem, from application and consumer-centric companies to cloud computing technologies and businesses tackling infrastructure needs. It also recently created a $300 million fund as an investment vehicle for the Ultrabook.

So far in 2011, Intel Capital has invested $472 million in more than 70 startups. The organization has seen six IPOs and 25 M&A exits this year, Intel Capital president Arvind Sodhani said.