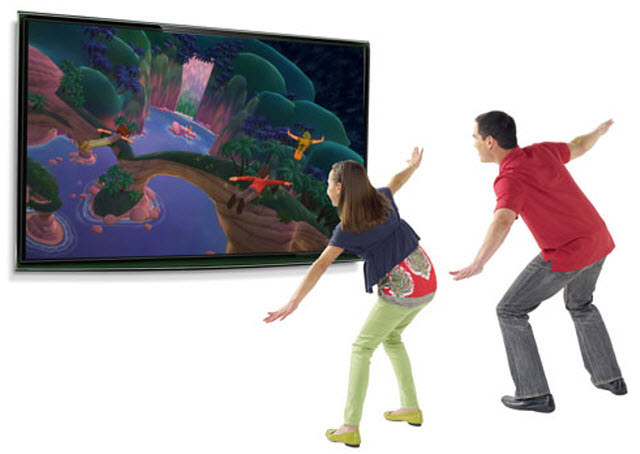 For the better part of five years, I worked as  Disney cast member. I spent day after day learning the biggest secrets of a company that protects fiercely and, as a result, I lost what Disney and its fan know as “the magic.” The extraordinary became mundane,  and in a weird way, I began to step away. Who knew it would take a virtual trip back to reignite my love?

In that sense, Kinect Disneyland Adventures does its job, and it does it very well; you’re constantly reminded of just what’s right about the Disney company and its brands, especially if you play with those familiar with the park. As a game though, it’s more of a mixed bag. It’s really fun and a cool demonstration of the tech behind Kinect to interact with the characters, but basic mechanics like moving around feel incredibly complicated, and will make you practically hate the experience. Still, I can’t help but recommend Kinect Disneyland Adventures for all of its charm, especially if you’re big on the park itself. 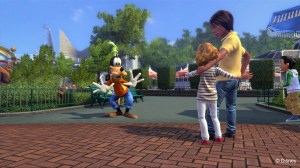 The Disneyland that never was but always will be

The idea behind Disneyland Adventures is simple, guide your avatar through the Disneyland park and go on adventures and quests as given to you by Disney characters. Now, this is a very idealized version of the famous theme park; there are no lines, the cast members all speak English, it’s not crowded, and you’re able to walk directly up to any of the characters at anytime. Curiously enough — there’s always a crowd around the characters, but no one — but you, ever goes up to them.  To the game’s credit, the Disneyland in the game is pretty accurate compared to the real deal; I was able to run around, without looking at the map, and get where I needed to go just based on my memory of the park. Of course, some changes have been made for the sake of game play, but those are few and far between. The permanent popcorn carts and stands are even in the right place, impressive for a game that basically serves as a commercial.

The characters are also impressive in their recreations. For instance, we found Captain Hook outside of Peter Pan’s Flight in Fantasyland, and one of the options is to extend your arms in a hug motion to interact in that way with the characters, and while everyone from Mickey and Donald to Cinderella and Buzz Lightyear was happy to give a squeeze, Captain Hook (along with the rest of the Villains for that matter) were unsure of what to do and seemed very confused when we tried. Of course, this is a Disney game and every villain has a heart of gold deep down inside, so we eventually got our hug. There’s a fair number of interactions with each character, like dancing and signing autographs. The autographs are one of the game’s coolest feature, as you’ll gain points for collecting different autograph books (there’s one for heroes, one for villains, one for Princesses and so on) and getting the right characters to sign them. I was at first a bit annoyed that I had to do so much backtracking, but it became incredibly fun to dash around the parks with different books. 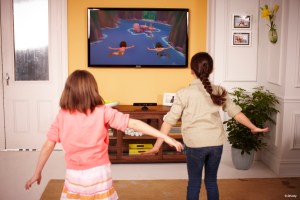 Each character you find will give you a different quest to go on in the park, whether it be giving something to another character, tracking something down or going to one of the attractions. The attractions are where the Kinect capabilities really come in. The rides and shows take the form of motion-themed mini games, where you’ll interact with the attraction and its story. Much like The Disneyland park itself, these are idealized versions inspired by the attractions, so instead of actually going on the Matterhorn itself, you’ll be bobsledding down a hill and trying to evade the Yeti. A lot of these worlds are pretty cool, like the Haunted Mansion inspired world, which finds you hunting ghosts with a flashlight while the famous Ghost Host narrates your adventure. The worlds are given a more cell shaded look than the rest of the game, which lends a classic animation feel to them. The best part of all of this again is just how right they got everything, with the Ghost Host in the Haunted Mansion, Captain Hook and Smee in the Peter Pan levels and even the corny jokes in the Jungle Cruise section. 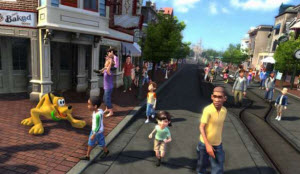 Now, it can be pretty hard to walk in a Disney park because of the crowds, but even though they are pretty much non existent in the game, it’s an incredibly frustrating experience just to walk. Kudos to the developers for trying to not just making it an on-rails game like most Kinect developers, but there’s simply got to be a better way. You move around the game by holding your hand up; holding it straight causes you to move forward while moving to the left or right has you moving in that direction and putting your hands to your side to stop. When it works, it’s great, but unfortunately, it doesn’t work a lot. The slightest movement will cause your character to shoot off into another direction — just hope you don’t get into a corner, as it’s going to be hell to get out of it.

Things get worse when you start unlocking different items to use like a magic wand or a megaphone. You gain these items by lifting your hand up and selecting them from a pop up wheel. While it may sound simple, the game has a hard time registering whether you’re trying to pick an item, or run forward and it’s incredibly frustrating. At one point I had the wand equipped, and saw the same teacup animate probably 20 times because the game wouldn’t register that I was just trying to put it back. On that same note, the voice controls are pretty superb. While they weren’t perfect, the game was incredibly responsive a good portion of the time.

It may be a pain to get around, but Kinect Disneyland Adventures does its job of reminding you just why you love the Disney parks. You’ll interact with your favorite characters, go on your favorite rides (sort of) and even find some secrets hidden around the park. The game is at its best when its played by families and kids get excited when they see their favorite characters. At the very least, it serves as a running commercial for the Parks. Kinect Disneyland Adventures gets a 70.