Life is a stone. A stone arbitrarily kicked down a steep, rubble-strewn path. As it tumbles inexorably down this path, under the force of this arbitrary kick, it gathers upon itself bit after small bit of matter. At times actively, most often passively. As it gathers its future self, it may change direction, striking upon advantageous angles, shattering against hard ones, but in all, gaining momentum. Life is a stone. 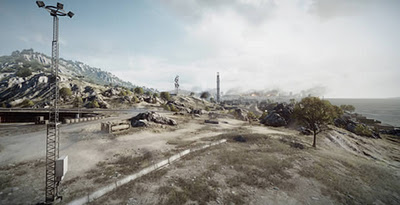 Near its end it has become a monument. A rolling, tumbling monument to momentum, force, and inevitable forward motion that succumbs no more to the rubble in its path.

THAT WHICH FORMS THE BASIS OF AN ARGUMENT

As a review of yet another first-person shooter, I find it appropriate to once again dive into the history and subsequently my understanding of the genre. I find it both useful, in terms of building an argument, and insightful, in terms of gaining understanding, to again ask some of the more easily assumed questions about why they are so popular. And it is for this purpose that I probe: FPSes have been popular for a long time. A Very Long time. Practically as long as I’ve been playing games. 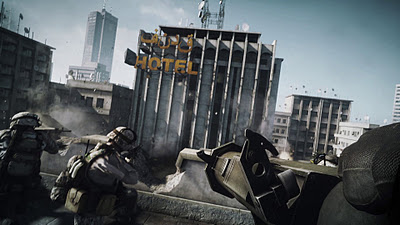 It’s obvious, I know, but here’s the point that’s often missed: the popularity of first-person shooters must be endemic to the human race. It’s simple psychology. Life, being a matter of perception and thusly perceived through the first-person perspective, lends itself to a strong desire to perceive everything in this way, or else risk disbelief. It’s as though we can only truly experience things if we have experienced them firsthand, first row, and absolutely First Person. The stick in this proverbial mud though is that the art of videogames is the re-creation of experience, and as such any game that only believes in the First Person fails to address, and thus fails to re-create, the experience of the Whole Body.

WORDS ABOUT THINGS NOT WORDS

There is a legacy about FPSes then that tugs interminably at the gossamer strings of today’s shooter-saturated market. It is the legacy of Doom, of Quake, of Duke, and of the Tournament of Unreality. These are the games that defined the genre we know of today, and not only in the tangible ways (big guns, big men, big maps, big booms, and bloody bits). They brought with them their assumption of the First Person as well. And out of this assumption was created an expectation that has not been challenged much, perhaps until now. The question of whether or not this challenge has met with success may yet be answered today; the question of its righteousness is still yet unknown. 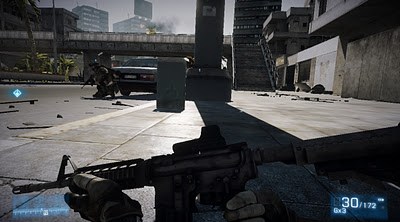 The legacy I perceive is this: immense concern for the First Person combined with a desire for, but lack of, technological superiority forced (and in some ways reinforced) the need and desire to create a more essentialist definition of what the First Person is. The questions begged: where does one see from? What does one see? Where is the gun? What is the Shooting to the First Person? What is the First Person to the Shooting? The simplest answer is here: the head. The mind. The soul. The thought. Everything that is resides in the massless center of gravity which we all possess as beings of undeniable mass. The simplest way to replicate the complex experience of shooting a gun, being shot at with a gun, and in turn shooting back was to place all the necessary functions and sensations on a single point within the perceived body of the shooter: the head.

And so, for years upon years we were but heads with guns attached, these weaponized centers of mass floating, nay flying through corridors of increasing fidelity and beauty. A few games attempted to grant some weight to our theoretical bodies, but we often felt it to be too burdensome. The truth of the essential point, the center of mass, was an easily consumed idea; it was logical, predictable, and viral. And success after success of those shooters which more accurately re-created the experience of being a weaponized center of mass solidified this ideal’s place in the hearts and minds of players and creators alike. But they had forgotten one thing: 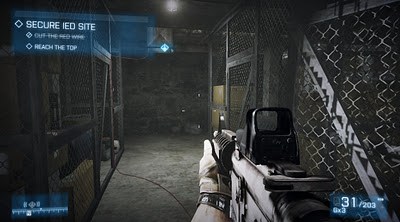 THE POWER OF MOMENTUM

Efforts to increase this awareness have, as mentioned before, been resisted; so much so that designers and developers have circumvented the heavily-guarded front gates and flanked it instead. Instead of applying weight to the head (aside from some gentle bobbing, screen-shaking, and general cluttering tomfoolery), they apply it to the atmosphere. Narratives in FPSes have become the means by which a player is provided a sense of substance and meaning. Ah yes, players can now say, I have indeed saved the world. Awesome, they proclaim, I have conquered the time-shifting mechanical Nazi overlord once more. Marvelous, I have traversed the great wastes to lay waste to my foe’s mighty fortress. And they have done all these with their disembodied, gun-wielding center of mass. So far, it has worked. 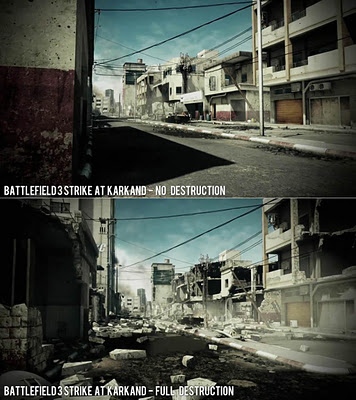 This narrative presents a problem to Battlefield 3.

IN THE GRIP OF VICES

The long, storied history of Battlefield lacks this focus on narrative. Instead, it has been content to roll over and over again upon a different idea, collecting small bits of it upon each pass, building its own brand of momentum. What Battlefield has always done best, and what drew me into the series first, was expanse: near-limitless possibilities on boundless maps with CPU-crushing numbers of AI entities. It mattered less that I was doing anything precise; at the very least it felt that I was doing something quantifiable. The first entry, 1942, supplied short, relevant post-game descriptions that accurately summed up my team’s performance in battle. By no means a coherent narrative, it provided the player a God’s-eye view of the results, and in that way allowed one to see one’s performance in a greater context. It was a different kind of narrative. A different, though equally substantial, kind of weight. 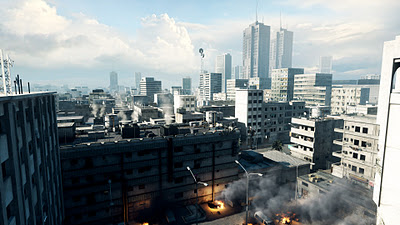 And yet this other momentum, that of the tight, focused, cinematic kind, was also building. And it was building faster. Faster than anyone had imagined, faster than anyone could have anticipated. It went from being a simple “video games” momentum to a cultural, financial, and psychological one. It was so momentous that each move it began to make shook everything around it, knocking television off-course at times, and radio, and even movies. And especially, especially other games. And the critical mass of this momentum was embodied by Call of Duty 4: Modern Warfare.

As CoD4 landed in the dead center of gaming, its force cavitated upward and outward, uprooting and blowing back even the deepest-rooted ideas about what games needed to be for success. And these irresistible cavitations knocked even Battlefield off-course, changing it forever. The result: the clearly forced inclusion of a narrow, focused singleplayer narrative stuffed into an engine clearly meant for open-ended play. The creation of claustrophobic, arbitrarily bound multiplayer maps that can barely accommodate 64 players. 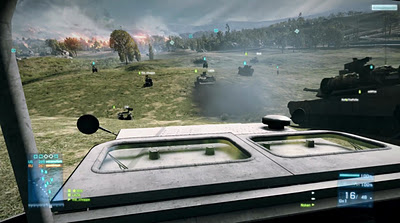 A nerve-pinching stranglehold and a loaded gun to the head. 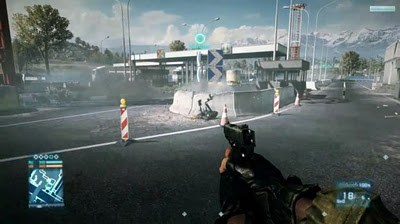 So, while the rest of the industry succumbed to CoD4’s disruptive waves, Battlefield set out to shore up its tracks. Both Bad Company and Bad Company 2 introduced a number of new gameplay mechanics that changed the way one could play a shooter: destructible cover, weapon-based progression running alongside soldier progression, and vehicles. It gave us a still greater landscape upon which we could both run and gun. Its intention and goal was not to simply design a more elaborate corridor in which to run in, but rather a more elaborate means of running through it. To that end they do substantial work in emphasizing the very thing that runs through them: the body.

This is Battlefield 3’s saving grace. So while its singleplayer is nigh-comically implemented, with its ridiculous “RETURN TO THE COMBAT ZONE” notifications and clumsy, perfunctory quick-time events, and begrudgingly gigantic exploding set pieces, it still plays like Battlefield. And despite the inclusion of a multiplayer map set in a completely closed kill corridor, it still plays like Battlefield. And despite rehashing and actually reducing the amount of destructibility in each of these situations, it still does something new, and something better. 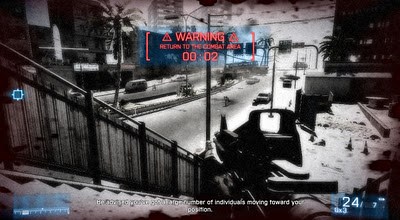 Battlefield 3 finally provides the player with an entire body. It finally creates an experience that more accurately reproduces the sensation of having a gun, shooting a gun, running with a gun, and diving to the concrete and crawling with a gun. No longer are we represented by legless, armless, bodiless centers of mass dutifully bobbing up and down under the presumed force of a sprint. As you dive from cover to cover, there is a real and tangible weight behind you. And yet it’s devoid of the overcompensation that plagued previous attempts. It’s an exceptional balancing act that occurs in our natural lives, and it’s an exceptional feat that it’s reproduced with such fidelity in a video game. Damn, it feels good.

The real question is whether or not this element is weighty enough to realign the momentum of not only the Battlefield franchise but also the industry. But of course, that question is beyond the scope of a simple review. The question that can be answered here is whether this element pulls this game far enough away from its failings in both level design and narrative flaccidity. Do I think so? Yes. Unequivocally yes. In fact, I have spent the past 10 hours reaffirming that Yes, none of which have been spent in the singleplayer campaign. It is absolutely worth the asking price to experience the weight that this game brings to gaming. 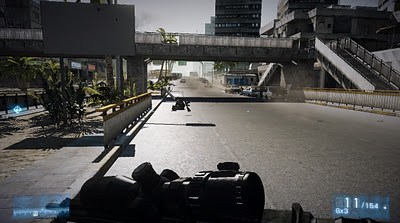 But of course, what I really wonder, and what I am anticipating with both dread and fascination, is whether or not Battlefield 3 will be the stone that knocks everything back into place.