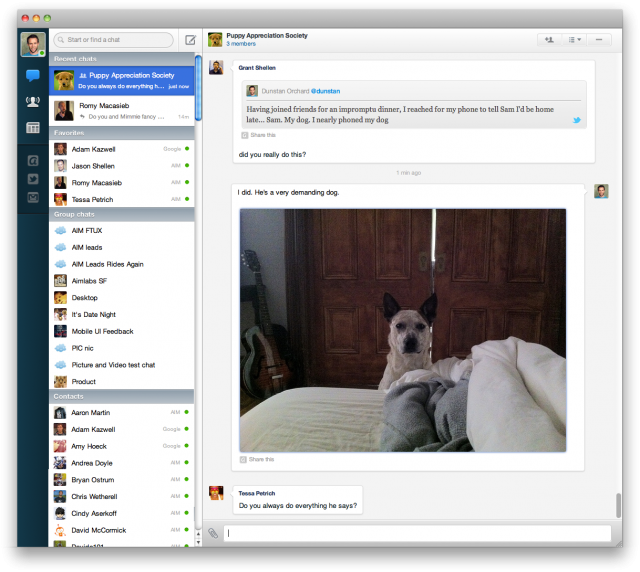 It’s been more than 10 years since I’ve used AOL Instant Messenger as my go-to chat client, but the new AIM may just be good enough to change that.

AOL launched a preview of its latest AIM vision today, which includes new desktop, mobile, and web apps. Surprisingly, AOL has cut out much of the clutter that previously made AIM a chore to use — it’s now streamlined and focused on conversations. Group chats are now a core part of the service, and video chats are seamlessly integrated.

The new AIM looks so dramatically different that you could easily mistake it for something from a fresh-faced startup — and that wouldn’t be far from the truth. The revamped messaging client comes courtesy of Jason Shellen and his team, who joined AOL after it snapped up Thing Labs a year ago.

Thing Labs was best known for its social media reader Brizzly, and Shellen admitted to me that there was some Brizzly DNA in the new AIM. That’s obvious from the way the new apps are organized, which resemble Twitter clients more than they do past AIM versions.

There’s less of a focus on the buddy list, and instead recent conversations are highlighted. Conversations are also synchronized, so you can easily hop back into a chat on your phone that you started on your desktop. You can easily add multiple friends to a conversation, which is infinitely more useful than boring old group chat rooms. You can also sign in with your Facebook and Google Talk accounts to chat on those services, which limits the need to juggle multiple clients. 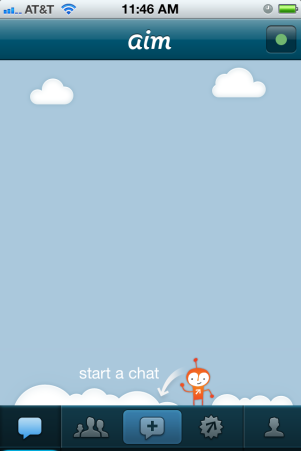 Another nice addition: You can send messages to friends while they’re offline (and vice versa), which will be instantly received when they sign on. In this respect, the new AIM resembles one of the hot new mobile messaging services like Kik or Facebook Messenger.

Conversations are also more interesting now, thanks to the ability to post videos and images inline. That adds some nice spice to chats that previously consisted of text and links. The new AIM also takes a cue from Twitter and Facebook in the way it handles status updates. Your updates are now broadcast to specific people who follow you.

Video chats also seem improved over previous versions of AIM, but it doesn’t yet support group video chats. For now, Shellen says, group video conferencing is available via AV by AIM, a simple web-based solution. (I wouldn’t be surprised if AV eventually gets integrated into the new AIM; AOL would be stupid not to do so.)

Shellen’s crew also fixed AIM’s file sharing problems by giving up on the idea of direct peer-to-peer sharing. Now when you upload a file, it gets stored on AOL’s servers, where it will sit for around 72 to 100 hours. You can easily share links to files that you’ve uploaded via AIM and on the web. Images that you’ve uploaded will also be displayed inline, just like when you link to an image somewhere on the web. Shellen wouldn’t speak to any file size limit, but I would imagine it’s somewhere around a few gigabytes per user.

I’ve been testing out the new AIM iPhone app over the weekend, and it’s definitely an improvement over the previous boring and buggy AIM app. It includes all of the features above, except for video chat, and seems exceptionally polished for an initial release.

All of the new AIM apps feature integration with Twitter and Instagram, though not in the way you’d expect. You’ll only receive updates from those services that are relevant to you, for example when someone mentions you on Twitter, or likes one of your Instagram photos. Shellen tells me that, eventually, the new AIM could morph into a truly cross-service app like Brizzly, but that’s not going to happen anytime soon.

The desktop and web versions of the new AIM are available right now, while the Android and iPhone mobile apps will land later today.