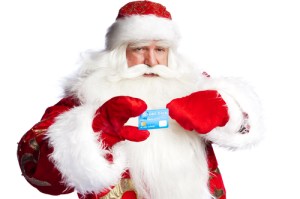 Every year, more than 25,000 bell-ringing volunteers, some dressed at Saint Nick, hit the street corners near stores and shopping malls to collect change and small bills from holiday shoppers. Last year, these good Samaritans raised $142 million for the Salvation Army, which was used to buy clothing, food, toys and other goods for people in need.

Square is providing the card readers and Sprint is donating the smartphones and the wireless service. This year, only Salvation Army bell-ringers in San Francisco, Chicago, Dallas and New York City are getting the mobile charging units. They will of course still have the trademark red kettles, for those of you who believe in cash.

“The goal of the technology behind the Square reader is simple — make transactions easier, and this year, we plan to make donating to The Salvation Army as easy as possible for our donors,” said Salvation Army’s Major George Hood in a statement

While the Salvation Army Santas are not directly affiliated with the actual Santa Claus, a quick swipe could go a long way to getting your on his Nice list.