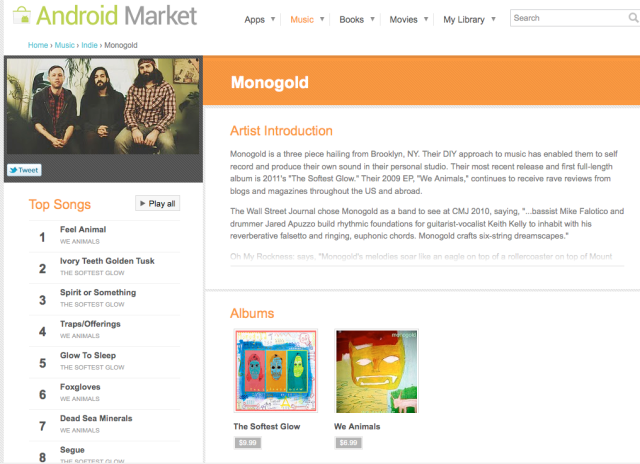 It seems that Google was paying close attention during the years in which Myspace was slowly pissing away its potential to remake the way independent music artists promote and distribute their music.

The search giant today publicly launched its free Google Music service, which offers users the ability to upload their music library (up to 20,000 tracks) that can be accessed anywhere with a viable internet connection. Google also announced the addition of music sales to its Android Market — a move that’s sure to give Apple’s iTunes a run for its money and make independent music artists take notice.

But perhaps the biggest piece of news revealed by Google about the new service is its intention to give smaller, virtually unknown music artists a direct route to distribute their music to fans (provided that they own the rights to their work).

The new music service includes an Artist Hub feature, which lets up-and-coming musicians set up a profile that allows them to upload songs, set prices, link directly to music clips or videos and more. The Artist Hub profile costs $25 — the same amount as an Android developer account.

Those artists keep 70 percent of the revenue from each sale and gain access to detailed financial and promotional analytics. The Artist Hub is a far cry from what Myspace started to accomplish with its own music profiles in 2008. However, unlike previous Myspace owner News Corp., Google isn’t trying to retain the copyright to anything that gains popularity on its site. The move by Google also seriously damage’s Myspace’s future plans to remake itself as a music-focused social network.

I’d expect every indie/hipster/underground music group to flock to Google Music in droves with this kind of opportunity.

If you’re an aspiring musician, let us know your thoughts about the Artist Hub in the comments below.