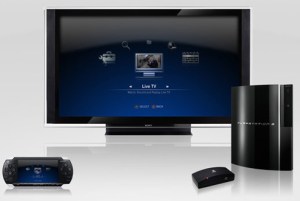 Not content to simply partner with services like Google TV, electronics manufacturer Sony is exploring the idea of launching its own Internet-based TV service, according to a Wall Street Journal report that cites people familiar with the matter.

Such a service would provide an alternative over cable-TV and satellite operators, but would also face growing competition from popular set-top boxes, like Roku, Apple TV and others.

According to the report, Sony has approached several big media companies about offering their TV channels to air over the proposed service, which customers would access through Sony television sets, Blu-ray players and the Playstation gaming consoles.

Basically, Sony wants to mimic what cable providers are already doing — reaching agreements with media companies for a channel (or channels) or content that can be bundled together and sold as a subscription to customers. Sony’s service, however, may allow for greater flexibility. For example, the company might charge for each individual channel of programming rather than large packages.

Sony has lots of incentive for wanting to enter the TV service market. It has millions of internet-connected devices in homes across America. It understand that most people find the current selection of premium TV content from cable providers over-priced. If Sony were to steal even a small portion of Comcast’s 22.4 million video subscribers, it would be very lucrative.

However, if Sony does decide to create its own TV service, its unlikely that it would be very successful. First of all, the company has to reach partnerships with all the same media companies that Comcast, Dish Network, DirecTV and others currently have. Since some of those media companies are also the owners of cable provider businesses, its unlikely that they’d be willing to forge deals with Sony. Also, the company has had ages to put together a media service comparable to Microsoft’s Xbox Live Gold offers. Any attempt to do so now would be well behind.