VivaReal, a Latin American real estate portal we wrote about in 2010, announced that it has pulled in its first round of institutional funding for an undisclosed amount.

Greg Waldorf, an investor and board member of real estate portal Trulia, participated in the round and will sit on VivaReal’s board. Simon Baker, former CEO of REA Group, Australia’s leading real estate portal with a market capitalization of over $1B also invested and is an advisor.

Whereas, in the US, real estate agents and portals can make use of a centralized property database called the Multiple Listings Service (MLS), other countries lack such a repository. In those regions, providing access to such a database can attract substantial advertising spend. 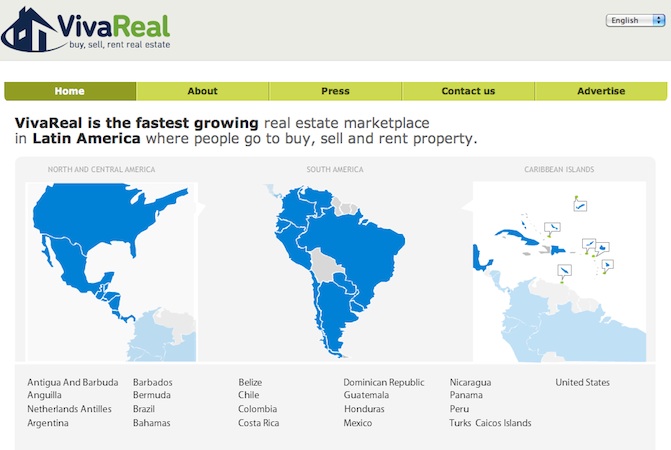 In the US, Internet real estate plays such as Zillow and Move, Inc. are valued at $828 million and $277 million respectively, while Trulia is still private with plans for an IPO. In contrast, in the UK, a country lacking a comprehensive, centralized MLS database, a portal such as Right Move is valued at well over $1B. This is could be an example of what Glenn Solomon, partner at GGV Capital, recently wrote about concerning Internet companies outside the US having potential to realize strong profit margins and valuations.

VivaReal, a company founded in 2007, has amassed a database of 260k properties in Brazil and uniquely offers a fixed price for unlimited listings. Its main competitors ZAP and ImovelWeb have approximately 250k and 100k properties respectively. These players are vying for a real estate advertising market estimated to be worth over $2B.

The Globo and Estado São Paulo newspaper groups founded ZAP in 2006, while Archote Publicidade founded Imovel Web in 1999. Though only a fraction of Brazil’s 57k real estate agents advertise on any portal, ZAP and Imovel Web have managed to grow revenues substantially by building direct sales forces to target these customers.

VivaReal’s approach includes direct sales, unique offerings (packages with unlimited listings) as well as leveraging investments in its technology platform for improved user experience and better integration with other sites. This is important because while the US boasts real estate portal integration standards such as RETS, countries such as Brazil have as many as 50 different such standards to support.

With both the soccer World Cup and the Olympic Games coming to Brazil in the coming years, the country should continue to have a dynamic economy and real estate market. According to VivaReal CEO, Brian Requarth, the current funding will provide the resources required to step up sales efforts and better leverage the company’s platform investments.