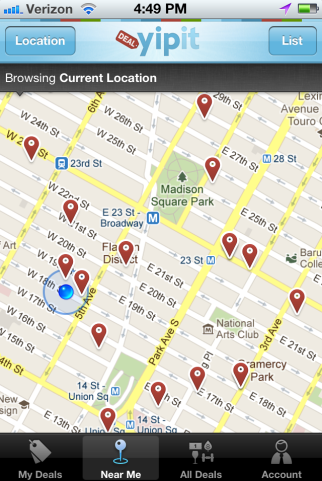 The free Yipit app will be location aware and will enable users to take advantage of nearby deals similar to Scoutmob, TheDealMix and TheDealMap, which all allow map-based navigation based on what is discounted nearby.

With the ever-present threat of “deals fatigue,” does the world need another deals app? The answer to that question might be yes, if Yipit were just any other app. While many of the features of Yipit’s app will be familiar to anyone with a smartphone, functionality such as location awareness and push notifications, it’s the company’s mastery of daily deals data that will set its app apart from the crowd.

Yipit is a leading data provider to analysts who watch the daily deals industry. The company has also offered a daily email aggregating deals offered by  hundreds of national and local daily deals providers across the U.S. The company has aggregated more than 1 million deals nationwide, all without spending a dollar on marketing, says Yipit co-founder Jim Moran.

Moran disputes that there is such a thing as daily deals fatigue. “Nobody complains there are too many products available online,” Moran says, because e-commerce sites such as Amazon and eBay do a good job of filtering products and putting the right offers in front of the right people. Moran says that if consumers received an email with every product available online, they would have ecommerce fatigue the same way people talk about deals fatigue. According to Moran, the true power of algorithms like the one powering the Yipit app is evident not from what you see, but from what you don’t see–namely, the deals that aren’t relevant.

And as the holiday shopping season approaches, Moran says he is excited about using the app to find gifts for his two sisters who live in San Francisco. Yipit is hoping to decouple the idea of local shopping from local consumption. The app will make it easier than ever for someone who doesn’t live in a local area to buy products or experiences for someone who does, without having to sign up for emails, or sift through offers.

Time and again Yipit proved to be a bee in Groupon’s bonnet, as the company geared up for its Nov. 4 IPO. By tracking the number of deals Groupon sold, and calculating the revenue split with merchants, Yipit was able to issue reasoned estimates of Groupon’s true profitability, even as Groupon itself was loathe comment. So Yipit may yet have a strong hand to play with its mobile app.

Groupon and LivingSocial together account for more than 75 percent of the revenue of the entire daily deals industry, but they have less than 20 percent of the total inventory, which means that it falls to consumers themselves to take advantage of additional 80 percent of discounted local products and services that are available.

With the Yipit app the many small players who make up the “long tail” of daily deals, such as InBundles,  now may have a fighting chance.