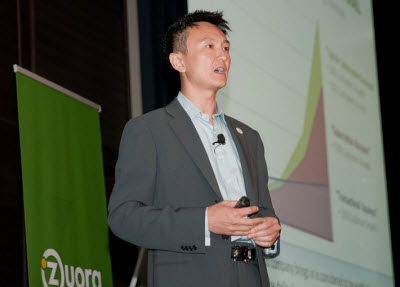 Zuora aims to be the leader in subscription billing as it raises $36 million in a fourth round of funding.

Redwood City, Calif.-based Zuora will use the money to fuel its overseas expansion and extend its product lines to address the growth of the “subscription economy” around the world. The company offers subscription billing as an easy-to-set-up cloud service with a wide range of offerings.

Zuora says it is rapidly expanding in Europe, particularly in the Netherlands, Germany, France and Ireland.

To date, the company has raised $82.5 million. Mike Volpi, partner at Index Ventures, is joining Zuora’s board.

The company said that in the first three quarters of operations, the European and Middle East countries have signed up $2.5 billion in contracted subscription transactions.

Co-founders Tzuo and K.V. Rao and Cheng Zou made a good bet in 2007 that industries would shift from a “buy once” product-based model to a services-based economy with recurring subscriptions. They call this the “subscription economy,” and it is rising to the forefront in communications, media, technology, consumer services and other industries. Zuora built a platform to enable businesses to adopt subscription commerce quickly.

Zuora is now one of the fastest-growing private enterprise software companies, with more than 100 percent annual growth in bookings. It has struck 10 deals in the last 18 months worth more than $1 million. It signed up 100 new enterprise and high-growth customers in the first three quarters of 2011, and it doubled its number of employees to nearly 200.

Zuora hopes to liberate companies from the “constraints of old guard enterprise systems” such as enterprise resource planning software from SAP and Oracle. It calls their solutions outdated and obsolete in the age of subscription business models.

“There is a clear global mandate for companies to shift rapidly to the services-based subscription economy,” said Tzuo. “The product-focused, industrial economy and the systems that support it are part of the past. It’s time for a new perspective and a new system of record for the subscription economy.”

Gartner says that by 2015, 35 percent of the Global 2000 companies will generate revenue through subscription-based services and revenue models.