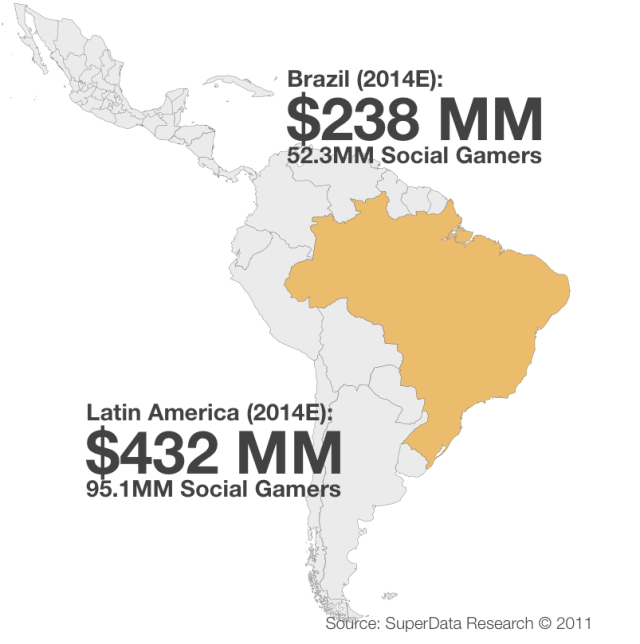 The market for social games in Brazil is expected to grow as large as $238 million by 2014, according to a study released by social research firm SuperData. That’s a significant increase from the $136 million the market is expected to be worth by the end of this year.

The study, which is based on the user behavior of 2,414 users in the region also concluded that in that same time frame the size of the social gaming userbase in Brazil will grow to 52.3 million. Currently Brazil accounts for 35 percent of the Latin American social gaming market, which itself makes up five percent of the worldwide market.

A similar study released last month by Amsterdam-based research firm Newzoo revealed that the current userbase of social gamers in Brazil is around 35 million. Earlier this year SuperData released a study showing that virtual goods revenues across all of Latin America are expected to rise to $517 million by next year, with Brazil leading the way, followed by Colombia and Mexico.

Currently the average revenue per paying user in Brazil is $1.87, approximately $0.50 less than in North America. The most popular form of payment is local electronic wallet solutions, such as Payseguro. The largest social network in Brazil is Orkut, which boasts 66 million active users, nearly 60 percent of which hail from Brazil. Games based on platforms other than Facebook, such as Orkut, are expected to reach $5.6 billion in revenue by 2014.

“With social game revenue growing more than 36 percent over the past year alone, there are real opportunities to capture market share and make the most of this first-mover advantage,” Janelle Benjamin, SuperData’s Director of Research, said in a statement.