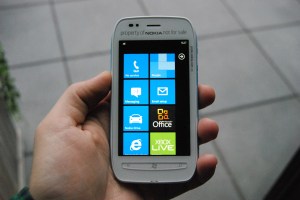 Word on the street is, AT&T is bringing the much talked-about new devices stateside in 2012.

AT&T executive Glenn Lurie told Businessweek that the carrier is in final talks with the smartphone manufacturer to bring its Lumia 800 and 710 Windows Phones to U.S. consumers.

We know you tech blog-reading types love to bag on Microsoft, but we crave your indulgence. We spent some time hands-on with both Nokia phones, and we were most impressed with the slick Windows Mango operating system coupled with Nokia’s signature smart design.

As our Devindra Hardawar wrote at the time, “The Lumia 800 is stylish enough to make Nokia a hip brand once again, and it just may help to push Microsoft’s Windows Phone platform beyond its current also-ran status.”

If you love the idea of taking the hardware (and its software) for a spin, but you don’t want to jump onboard the AT&T network, just wait for more announcements over the next couple of months, since Nokia previously said it would be bringing a lineup of devices to the States on multiple carriers in early 2012.

The Nokia brand has been on a steady decline in the U.S. ever since the advent of smartphones. And Microsoft has struggled with its mobile offerings, which have typically featured design work on par with or better than that of its competitors but that fails to perform commercially.

But since its launch, we’ve been calling Windows Phone a “sleeper hit.” Even Microsoft doesn’t really expect the OS to take off until 2012. And as for the Nokia partnership, this might be a case where two seeming “wrongs” make a right.

Time — and sales figures for next year — will tell.