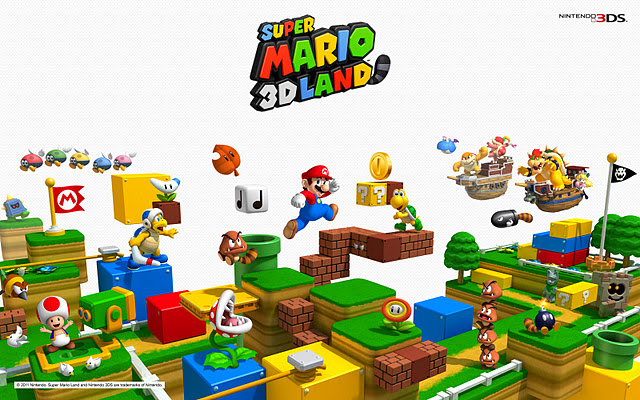 Mario has been the face of video games since his creation in 1985. The kind of popularity that Mario and Nintendo have received from him is unfathomable, and I have no doubt in my mind that his newest reiteration, Super Mario 3D Land, will continue to keep Mario’s popularity and legacy in tact. 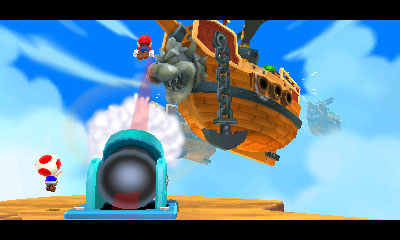 From its first release on the Nintendo Entertainment System, Mario has stopped at nothing to be the best. Upon starting its legacy in the 80’s and 90’s, the popular plumber has rocketed his way to the top of the best selling games list on each of Nintendo’s platforms to date.

Now, in 2011, Nintendo has turned to Mario again, as it needs to resurrect sales of its flagging 3DS gaming handheld. Fortunately, not only is Mario in eye-popping 3D on the 3DS, but the two worlds of 2D and 3D collide to make for a definite redefinition of the series and yet another new way to play Mario that people thought impossible.

With Super Mario Galaxy, Super Mario Galaxy 2 and Super Mario Bros. Wii, the pinnacle had been set for Mario. All three of the titles were well received and had a massive amount of sales. As Mario’s success furthered, the newest platform, the 3DS was announced and released.

As the 3DS has had a bit of a rough start since its debut in March, Nintendo is in an absolute bind and definitely needed one of its franchise games to reintroduce stability into their newest handheld. After cutting the price of their 3DS only months after its introduction, it seemed gamers were reluctant to trust the newest DS, as glasses-free stereoscopic 3D seemed like a gimmick.

Considering Nintendo’s past tries at true 3D, the comments were somewhat justified, and in general, gamers have yet to fully embrace the 3DS. However, the potential is still there for the platform and it is still surviving.

Some thought Zelda: Ocarina of Time 3D would help the budding platform, and it did to an extent, but what better way to put absolute faith back into the new platform then with the man that made the original Nintendo fly off the shelves. Yes, Super Mario 3D Land may be the answer for Nintendo’s newest handheld. 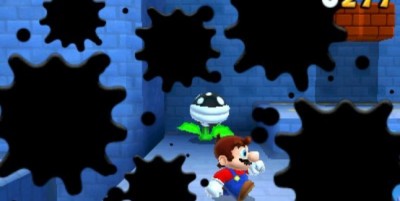 It is completely astounding to me how Mario keeps wowing players with each and every game Nintendo releases. From Super Mario Bros. to Super Mario Galaxy, I have never once grown out of playing Mario or decided it just wasn’t that fun anymore. The reason for that is each and every Mario has gotten significantly better than the last. Of course, the Mario faithful will say, “What about Super Mario Sunshine?” But even Sunshine brought joy to a lot of people in the way of a beautiful environment and new gameplay with F.L.U.D.D.

Looking back, Mario and friends were already beloved by their second title on the NES. The 2D side-scrolling platform was a hit and it didn’t matter who you were. Back in the 80’s, Mario was your favorite game, period. The 2D world of Mario was way ahead of its time, and it showed, as this was how Mario was successfully designed through Nintendo’s first two systems, the NES and SNES.

Then, Mario did something that changed video games altogether. With technology advancing, Nintendo wanted to do something different with Mario on the Nintendo 64, and boy, they did. Mario was thrown into 3D, and it was done with absolute perfection. Super Mario 64 is still the one step in the series when everyone says, “Wow, that was really something.” It redefined how we played Mario.

Now Nintendo has done it again, in 3D on the 3DS. All factors come into play when being thrown into the 3D world and suddenly switching into 2D mid-level. Not only does it present a small challenge, but it will also allow for a new style of exploration to happen as you make your way through each level. 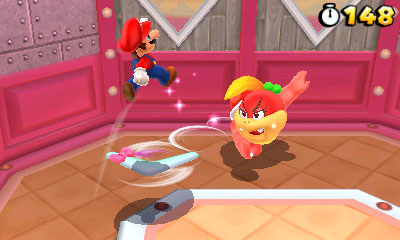 Thinking back, I remember how jealous I was when one of my good friends received a Virtual Boy for Christmas and I had to watch the fun ensue right before my very eyes. At the time, I was convinced it was the way of the future. It looked so futuristic with a red outer shell and I couldn’t get over that it actually produced a 3D world inside.

Then, after playing it once or twice, while my friend took a moment with his other Christmas gifts, I slowly began to realize it wasn’t anything like I’d imagined. My eyes instantly began to strain and all the games were just red…what?!? I was heartbroken, but deep down inside, I thought maybe there was a chance 3D would make it back into a Nintendo platform and actually hold its own.

Well, it turns out I was right, and Mario’s return to the true 3D world was more fun than I ever could have thought up or have imagined in my younger days.

It is hard to really describe the overall experience of Mario in true 3D. Seeing it for the first time is truly an experience. The overall detail and magic of Mario literally jumping out of your screen or Bowser’s fireballs coming directly at you is something pretty spectacular. Not only that, but Nintendo did wonders on the level design to integrate the 3D capabilities perfectly.

There are so many areas in the game that wouldn’t have been as great without 3D. From your enemy’s boomerang being thrown through the screen to levels having specific obstacles to emphasize the 3D offers a little something extra to the experience, and helps to maintain the staple of Mario games, fun.