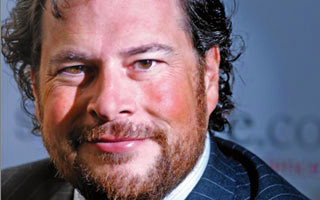 Today, Salesforce announced its Q3 earnings, which included a record $584 in revenue — a 36 percent year-over-year increase.

The bulk of that money came from the company’s subscription and support services, which accounted for $549 million. The remainder of the company’s revenue came from its professional services and other sources, and totaled $35 million.

For the quarter, Salesforce reported $129 million in cash generated from operations, representing 74 percent year-over-year growth. All told, the company ended the quarter with a stockpile of $1.3 billion in total cash, cash equivalents and marketable securities.

Earlier this month, the company promoted executive vice president George Hu to the role of chief operating officer. Hu is the company’s first COO and shares some responsibility for the results of today’s earnings report.

At the time of Hu’s promotion, Benioff said, “George’s leadership over the past nine years has been key to driving Salesforce.com’s growth to over a $2 billion run rate. I look forward to seeing his vision and leadership as COO scale our growth toward $10 billion and beyond.”

CloudBeat 2011 takes place Nov 30 – Dec 1 at the Hotel Sofitel in Redwood City, CA. Unlike other cloud events, we’ll be focusing on 12 case studies where we’ll dissect the most disruptive instances of enterprise adoption of the cloud. Speakers include: Aaron Levie, Co-Founder & CEO of Box.net; Amit Singh VP of Enterprise at Google; Adrian Cockcroft, Director of Cloud Architecture at Netflix; Byron Sebastian, Senior VP of Platforms at Salesforce; Lew Tucker, VP & CTO of Cloud Computing at Cisco, and many more. Join 500 executives for two days packed with actionable lessons and networking opportunities as we define the key processes and architectures that companies must put in place in order to survive and prosper. Register here. Spaces are very limited!