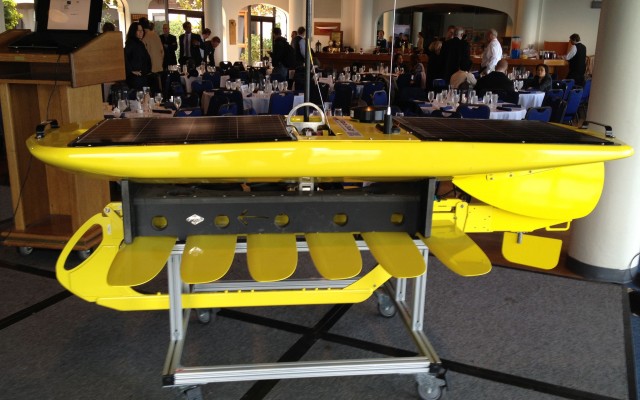 Between the bottom of a swimming pool and the surface of Mars is one frontier a robot has never crossed: the Pacific Ocean. While humans and robots have conquered land and space, relatively little is known about our oceans, yet they cover more than 70 percent of the Earth. A Sunnyvale-based startup believes its new fleet of robots could make the ocean a mystery no more

In San Francisco today, a quartet of Liquid Robotics Wave Glider unmanned robots were set afloat in the Pacific. They’re on mission to cross the world’s largest ocean and collect data, break world records, and bridge the gap between the sky and the murky depths below. The missions will be a success when the robots, which are traveling in pairs, arrive in Australia or Japan where their journeys are expected to end 300 days from now.

The Liquid Robotics PacX Challenge will be flying the banner for science, collecting data throughout the journey and making it publicly available on the Internet for anyone who is interested. The PacX Challenge (Crossing the Pacific)  is sponsored by Google Earth and Virgin Oceanic. Liquid Robotics chief of innovative applications Ed Lu said outer space is in some ways easier to explore than the ocean, because it’s predictable, and controllable. The sea is the opposite. And because there’s still so much to learn about the ocean — as little as 5 percent has been explored — getting new data can be tremendously lucrative.

The Wave Glider has been described as the perfect storm of electronics and satellite communication because it can be propelled in perpetuity, harnessing energy from the rise and fall of waves while its solar powered instruments relay data to Iridium satellites.

From above, the Wave Glider looks like a surf board with solar panels. But 22 feet below the surface is where the real action happens. A set of wings swish back and forth to propel the Wave Glider forward, as it rises and falls among the waves. The Wave Glider gets all the energy it needs from tidal motion, of which there is an inexhaustible supply.

There are countless uses for these ingenious robots, such as monitoring marine habitats or tracking the speed of ocean currents. And the data they collect can be profitable. As an example, Liquid Robotics chief executive officer Bill Vass said that for every knot that a tanker ship can save making the trip between China and the coast of the U.S., it will save $200,000 in bunker fuel. A pair of Wave Riders on a research excursion off the coast of Hawaii discovered there was a one knot difference in ocean current within a mile’s distance. Oceanic research satellites suspended in Earth’s orbit are only able to determine this current speed information with an accuracy of 30 to 40 miles.

When Francisco Chavez, a senior scientist at the Monterey Bay Aquarium, was in graduate school, oceanographic research was like assembling a 1,000-piece jigsaw puzzle with only 25 pieces, he said. Chavez spoke at the Wave Rider launch event, where was part of a panel discussion about the future of autonomous oceanic research robots. Liquid Robotics chief executive officer Bill Vass also gave a talk at the event.

With the sophisticated instrumentation aboard the Wave Glider we can gather incredible amounts of knowledge about the sea at a fraction of the price of conventional methods, such as buoys and manned research vessels. Ed Lu estimated that collecting data with a Wave Glider is 100 times cheaper than a research ship, and he posited, “What things can we do 100 times better?”

Liquid Robotics has $42 million in venture funding, according to Bloomberg, from investors such as Vantage Point Capital Partners and Schlumberger, a leading oilfield services company with extensive offshore drilling operations. The oil and gas industry is a prime customer for Liquid Robotics, because they spend hundreds of millions of dollars annually to charter boats and launch buoys to collect oceanographic data. Weather systems and strong currents are just a few of the factors that can shut down production aboard offshore oil rigs, and these delays can easily cost tens of millions of dollars for a single day.