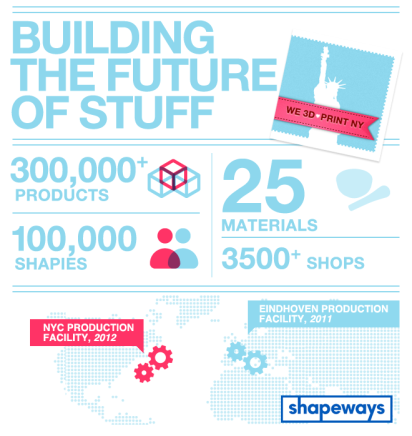 3D printing company Shapeways is opening up its own production facility with a new $5.1 follow on of funding from Index Ventures and Union Square Ventures.

When I think of 3D printing, I am reminded of those old Sci-Fi shows where you entered an object of desire into a device to only moments later open a hatch and find it sitting there. 3D printing is just that, and allows anyone to choose or create a paper design of something they want, which is then computerized and sent to a printer to “print” the actual thing. Designs are executed through layering a material such as plastic or metal line-by-line until it takes the object’s shape.

The process allows you to create personalized goods for consumers, without mass productions costs on the business side.

Currently, Shapeways is creating around 30,000 objects and month, using a number of different materials, including ceramic or stainless steel for household goods, and sterling silver for higher end creations. You can even order glass creations in multiple colors. In order to keep up with demand, the company expects to double its employee roster by mid-2012, as well as open a New York production facility to keep costs down for shipping.

“We are thrilled to infuse the NY start-up scene with technology that truly bridges the digital and physical worlds,” he continued in the post.

Another New York 3D printer MakerBot recently got the “Colbert Bump” when Comedy Central comedian Stephen Colbert featured MakerBot’s printing prowess on The Colbert Show. The company created a bust of Colbert and later on sent it into space using a weather balloon and GPS tracker to watch where the bust went. Check out the video of MakerBot sending Colbert’s head into space below.