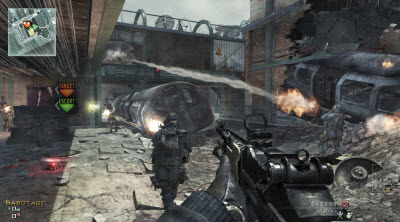 Activision Blizzard said today that its gamer social network Call of Duty Elite hit more than a million paid subscribers in its first six days. Since the launch of the service on Nov. 8 with the debut of the best-selling Call of Duty Modern Warfare 3, more than 4 million paid and free gamers have registered.

Still, the launch hasn’t gone as well as it could have because the company was overwhelmed by a huge number of registrations and other issues that brought down the service, forcing Activision into an embarrassing apology to gamers. Now the company says it is stable enough for gamers to try it out as they wish.

Activision Publishing said today that premium subscription services for Netflix, Hulu Plus, Sirius XM and Xbox Live each took about a year to hit a million paid subscribers. The numbers suggest that Activision Blizzard is marching on its way to getting gamers to pay for Call of Duty on a year-round basis, deepening their engagement beyond a few weeks after a game launch.

Of course, Call of Duty Elite has the benefit of riding on the coattails of the most popular video game in history. Modern Warfare 3 sold more than $775 million worth in its first five days of sales, making it bigger than last year’s Call of Duty Black Ops debut.

But while gamers were able to play the multiplayer version of the game, the servers for the Elite service have been spotty. Daniel Suarez, vice president of production at Activision, told us last week in an interview that the company had been able to restore enough service to guarantee service for those gamers who have signed up for the paid service. But at least half of those who are using the free version of the service aren’t able to log in, so they were still seeing error messages when they attempt to get in. The Elite web site still shows that service is intermittent.

As of last week, Activision had begun to add some services such as game statistics. Beachhead Studios allowed users to start setting up their clans, and 22,000 clans were created in the first 12 hours after that feature was restored. Now, more than 80,000 Elite clans have been created, 100,000 user-generated videos have been updated, and the service has had more than 3 million daily logins.

“The response to Call of Duty Elite’s premium service has been beyond our expectations and we thank Call of Duty players around the world for their unprecedented enthusiasm,” said Bobby Kotick, chief executive of Activision Blizzard, in a statement. “The number of gamers who have registered for Call of Duty Elite further illustrates how this service is poised to redefine social gaming and set a new bar for interactive entertainment.”

Eric Hirshberg, president of Activision Publishing, said today in a statement that for “the first several days, the service did not perform up to our or our fans’ standards” — although it was actually a couple of weeks, not just days. He thanked the fans for their patience and said the service is now stable for those who want to try it. Activision has given those who signed up for Elite’s premium service an extra 30 days at no charge. The cost for a year of membership in the paid version is $49.99.