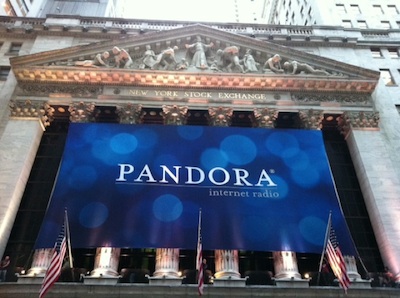 The company made a total of $75 million in revenue for the quarter (beating the $71.4 million estimate from analysts), which is up $8 million compared to the previous quarter. As for net income, Pandora stayed flat — also beat analysts’ estimates of a 1 cent per share loss.

Pandora reported that people listened to 2.1 billion total hours for the third quarter of 2011, a 104 percent increase compared to the same period last year (1 billion hours). The service has 66 percent of the country’s internet radio market and 40 million active users.

The company is very optimistic about growing revenue through its Pandora for Business partnership with DMX as well as opportunities to grow local radio advertising revenue.

“We’re just now reaching the share that give us the opportunity to enter local radio advertising,” said Pandora CEO Joe Kennedy during a quarterly earnings call. He added that the company is in a good position with a presence in most of the major markets for local radio.

Despite reporting decent numbers for the quarter, Pandora stock still slid over three percent to $11.42 per share.