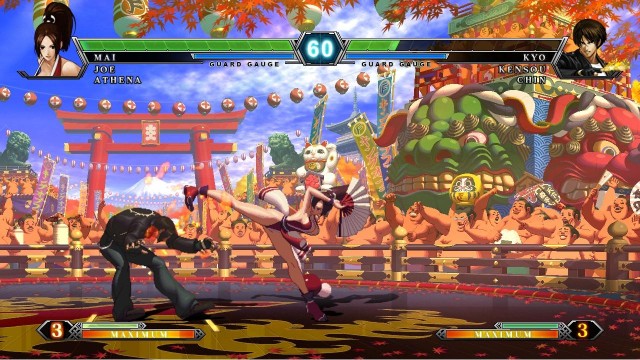 I know I’ve started each section off with something fans disliked about the previous game, but that should be a testament to the fact that the developers really did listen to fans and take that feedback to heart, as King of Fighters XIII improves on its predecessor in every way. And what would a modern fighting game be without its online component? I’ve found King of Fighters XIII to be considerably more stable than XII, which was notorious for its severely laggy multiplayer. Now, as long as your opponent’s connection is strong you should be set for a smooth ride. Unfortunately, that means that bouts with anyone outside of your region will devolve into a slideshow. I’m not exactly eager to get demolished by Japanese players who have been mastering the game in the arcades for over a year now, but I’d still like to be able to step into the ring with them whenever I’m feeling brave. As it stands now, any game against a non-US player was outright unplayable for me due to crushing lag. Your results may vary.

The selection of multiplayer modes are fairly straightforward. There’s Player and Ranked matches as well as Xbox Live party lobbies for you and friends. In Ranked matches, you have the choice to play Arcade or Practice mode while you wait for a challenger. This was popularized in Street Fighter IV, and I’m glad to see it becoming a standard feature in fighting games. You can also change settings such as time limit, rounds, and opponent skill, but it’d be nice if you could toggle some of the more interesting dip switches (such as aerial guards, tactical shifts, and critical counters) as you can in Street Fighter III: 3rd Strike Online.

The final major component of King of Fighters XIII is customization, which allows you to edit the colors of any character. Want Mai to have red hair and a yellow tunic? Done. Want to change your entire team to don a hideous pink/green color pattern? Go for it. You can even discover some minor outfit variations such as Yuri’s leggings and Kula’s ice form, though there’s not much the developers could really do given the 2D nature of the visuals. Still, this adds a sizable layer to the game, and it will also help when playing online by providing distinctive avatars. And the best bit it is, it’s included in the game free (yes Capcom, that was aimed in your direction.)

Even as a peripheral fan of the series (I’ve played them all, though Tekken and BlazBlue are usually more my speed), this game is almost everything I’ve ever wanted from the King of Fighters franchise. There’s definitely room for improvement, and I hope that SNK will continue to experiment with the gameplay and fill the roster with MIA characters either through DLC or a worthwhile sequel in a year or two. That being said, this is one of the strongest and most relevant entries in the 15-year franchise. I won’t lie, the upgraded visuals are a substantial driving force in my championing of this game, but there’s also an undeniably deep and more importantly, enjoyable, experience under the surface. I believe that not only will fans love it, but it may be the game that finally snags a few newcomers as well. 85 out of 100