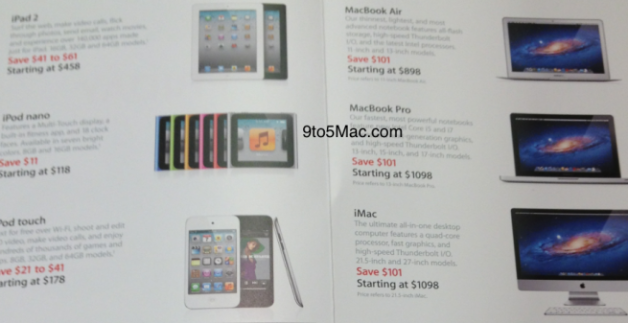 It’s time to finally treat yourself to that MacBook Air.

Apple is gearing up for Black Friday in a big way this year, with planned discounts for MacBook laptops, iMacs, iPads, iPods, and plenty more, reports 9to5 Mac.

According to leaked Apple flyers, the company will offer a $101 discount on Mac computers (bringing the Air down to a tempting $898 entry price), $41 to $61 discounts on iPads (depending on size), and smaller discounts for the iPod Touch and iPod Nano. If you’ve already got the Apple gizmo of your dreams, there will also be discounts on first- and third-party accessories, including $11 off the iPad 2 Smart Cover.

The discounts should be available at Apple retail stores and the company’s online store. Apple has been teasing its online Black Friday sale for the past few days.

While Apple is joining pretty much every other retailer in America with its Black Friday sale, it’s a particularly rare occurrence for the company to offer any discount. You may be able to land some Apple products cheaper as new models are announced, but typically consumers have to rely on third-party retailers to get their Apple fix on the cheap.