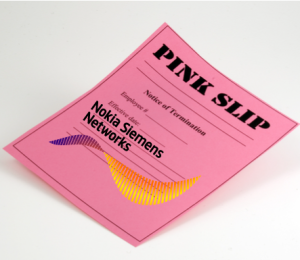 Telecommunications equipment company Nokia Siemens plans to eliminate 17,000 jobs (or 22 percent of its workforce) to save money and remain competitive, the company announced today.

Nokia Siemens Networks, which is a joint venture between Finland-based Nokia and Germany-based Siemens, has failed to turn a profit, which has caused both parent companies to reassess the venture’s future. The company was launched in 2007 to compete against telcom equipment manufacturers Ericsson, Huawei and others.

The job cutting measure, which will take place by the end of 2013, is part of the company’s effort to cut $1.3 billion from its annual operating expenses and production costs. Nokia said the cuts are also part of a strategy to focus on its mobile broadband and services.

“We believe that the future of our industry is in mobile broadband and services — and we aim to be an undisputed leader in these areas,” said Nokia Siemens Chief Executive Rajeev Suri in a statement. “At the same time, we need to take the necessary steps to maintain long-term competitiveness and improve profitability in a challenging telecommunications market.”

As for parent company Nokia, this isn’t the first round of job cuts taken over the last year. In April, Nokia announced that it was cutting 4,000 positions in Finland, Denmark and the U.K. And more recently, the company announced plans to eliminate another 3,500 positions as part of its overall restructuring plan. The mobile phone company is currently undergoing a major restructuring, which includes switching from Symbian to Windows Phone as its primary smartphone operating system.