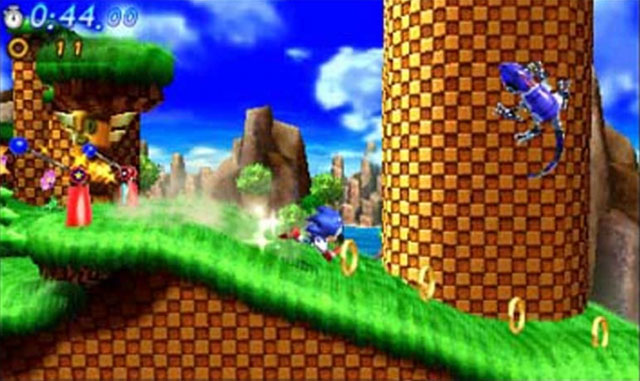 Sonic the Hedgehog has seen better days. After instant icon status and four classic Sega Genesis games in the early 1990s, he’s been steadily running downhill. The Saturn console never gave him a worthwhile showing. The Dreamcast suddenly died out from under him. Since then…well, it’s only gotten worse. Sonic has become synonymous with terrible 3D camera control and the strange fascination he holds for certain breeds of Internet crazy people.

Still, his 20thbirthday is a pretty big deal, and Sega’s thrown a proper celebration. Sonic Generations is more than just another retro-game collection. In fact, it’s a fairly ingenious concept for an old-school revival. More than a few classic franchises could swipe this idea and come up with something fun in the process.

Players who’ve already tried out the just-released console Generations will be familiar with the basic structure. Think of it as something like a tribute album. Each level is based on a stage that appeared in one of the past Sonic games, from the Genesis original through Sonic Colors for the Wii. The layout is two-dimensional – the game plays almost entirely like an old-fashioned side-scroller – but the graphics have the visual depth of modern 3D. Each stage stars a “Classic Sonic,” who runs and jumps like his 16-bit incarnation, or the updated “Modern Sonic,” with the boost, dash and slide moves from Sonic Rush for the DS.

3DS Generations doesn’t do too much with a shifting 3D perspective. The camera gets a little happy here and there in the Modern Sonic levels, just for extra effect. Otherwise it’s always looking square at the hero, 90 degrees to one side or the other, and frankly this is how it should be. 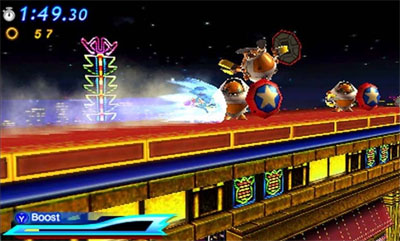 Pedal to the Metal

The appeal of the Sonic games has always been a simple thing. Going fast is fun. Blazing through a level at top speed is even more fun. Complicating this process usually makes it less fun.

There’s an argument to be made that the series first went wrong all the way back in Sonic Adventure, that it never should have gone all the way into a 3D world in the first place. A moving camera, more complex levels, more complicated goals and challenges, these things made it harder to go fast. Sonic is as much a racing game as a platformer sometimes, and there’s no point in a racing game that makes you go slow.

Intentionally or otherwise, Generations makes a handy illustration of the principle. Classic Sonic, with exactly two moves and two control buttons (although he gains a few new stunts in later stages), is at least as entertaining to play as his new-school slides-on-rails cousin. The Modern Sonic levels have more different things to do, but that often translates into more different ways to go wrong. It’s easier to crash into something, miss a jump, miss a target, or otherwise find a way to get stuck, stop, and have to get back up to speed again.

When the Modern Sonic levels move the camera around, it looks cool sometimes, but it doesn’t actually do much to change up the experience of interacting with the game. You’re still just doing your best to go forward as fast as possible. If anything, the fancy camera effects make the game play less involving – those sequences tend to limit the amount of control the player has over Sonic. The game becomes more like a series of quick-time events until the camera settles back down to its normal position.

If It’s Thursday, This Must Be Green Hill Zone

Altogether, Generations includes 14 main stages, a Modern Sonic and a Classic Sonic level for each of seven locations from Sonic games past. The stages drawn from 2D Sonics – Green Hill Zone from the original game, Mushroom Hill from Sonic & Knuckles — are pretty close to their original inspiration, while stages from the Sonic Adventure games and onward do some liberal re-interpretation of the source material. It’s pretty neat, actually, to play a traditional 2D Sonic level against the backdrop of something like the Radical Highway from Sonic Adventure 2. 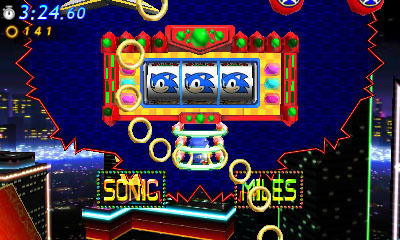 Some handheld players may feel put out by the fact that the console version has more stages overall. The 3DS game isn’t a cut-down port, though. Every level in this version is exclusive and original, and some of them are real prizes. The Casino Night stage from Sonic the Hedgehog 2 is a little slow and over-complicated, but it’s beautiful to look at, and it’s fun sometimes to ignore the goal in favor of tooling around with the goofy pinball-machine obstacles. 3DS Generations also gets a level from Sonic Rush (the Water Palace), a game that wasn’t represented in the console version.

Many stages have several layers and alternate routes to them, which gives them a touch of replayability. The one really useful thing that Modern Sonic’s levels do with their 3D layout is create different parallel tracks, each on a different layer of the foreground. At times there are two or even three routes next to each other, with ways to jump between them at key points in the level. Finding out how to nail every different path through the level is a fun little challenge for dedicated platform gamers.

Long-time fans may still find one omission a little disappointing. Although Generations features a remixed version of the Metal Sonic boss from Sonic CD, it doesn’t have any of the game’s actual levels, which were some of the biggest and most intricate creations in the entire series. That may well be the reason why they’re not in the game. It’s also the reason why they should be in the game. Someone on Sega’s dev team could have put in the extra effort to include more of the series’ very best moments.